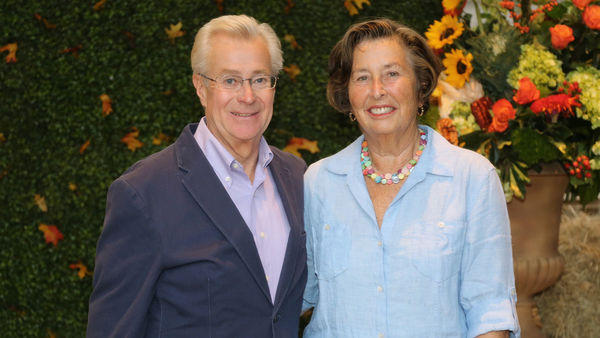 University of Notre Dame alumnus John A. “Jack” Kelly and his wife, Gail E. Weiss, have made a $1 million gift to his alma mater to support initiatives within the University’s Notre Dame International Security Center (NDISC) and the Office of the President.

“Jack and Gail have played an important role in the creation and development of the Notre Dame International Security Center, and this latest gift will do much to significantly enhance the work of our faculty in this important area of study,” said Rev. John I. Jenkins, C.S.C., the University’s president. “We are grateful for this generous donation and for their leadership and vision.”

Founded in 2008 and recently expanded with the addition of three new faculty members, the International Security Center is under the direction of Michael Desch, professor of political science.

“Jack and Gail epitomize the meaning of ‘God, Country, Notre Dame,’” Desch said. “Jack answered the call of duty in the Special Forces and then on Capitol Hill, where he met Gail, who also had a long and distinguished career there. Together they have been longtime, generous benefactors of Notre Dame and were the first supporters of the Notre Dame International Security Center. This gift will continue their commitment to assist Notre Dame undergraduates and graduate students in becoming our country’s next generation of national security leaders.”

Kelly is a 1974 Notre Dame alumnus and a member of the University’s Graduate Studies and Research Advisory Council. He is a partner in the McPherson Group, a Washington public policy firm that engages in regulatory and legislative advocacy.

“Notre Dame has engrained in its core the belief in God, country and Notre Dame,” Kelly said. “Its sons and daughters have served our nation in the military, intelligence and research community, ensuring our national security. By endowing this program, we hope to help expand the University’s long tradition of serving our nation. It is only fitting that in the 21st century we continue to advance the role of our students, alumni and faculty to continue to expand their fine work. Under the leadership of Father Jenkins and Professor Mike Desch, we know that this goal will be met and exceeded to help secure our nation and world.”

A retired U.S. Army officer with 28 years of active and reserve duty, Kelly commanded a Special Forces unit and was awarded the Legion of Merit. He also served as a political aide to Presidents Ronald Reagan and George H.W. Bush and as a staff member in Congress and the New York and federal courts. He currently serves as chairman of the U.S. Advisory Committee on National Cemeteries and Memorials and is a member of the board of the Army Distaff Foundation.

A graduate of the University of Maryland, Weiss served for a short time as a legislative liaison in the Johnson administration’s Office of Economic Opportunity. She then joined the staff of Rep. William Clay, D-Mo., and served 32 years in increased positions of responsibility in the U.S. House of Representatives, including as a senior executive staff director of the Committee on Post Office and Civil Service and the Committee on Education and Labor. She was the principal legislative staff person responsible for such major legislation as the Family and Medical Leave Act, the Civil Service Reform Act, Hatch Act reform and the Higher Education Act, and she led staff efforts to preserve the National Endowment for the Arts.

Weiss is a member of the American Association of University Women, and she and Kelly are members of the President’s Circle at Notre Dame.