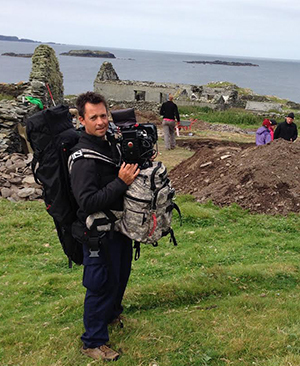 Rome. Bangladesh. An abandoned island off the Irish coast. These are just a few of the locations where William Donaruma ’89 has traveled as a filmmaker and teaching professor in Notre Dame’s Department of Film, Television, and Theatre (FTT).

“Nothing beats experience and pushing yourself beyond your comfort zone,” Donaruma said.

“My department has been really supportive of the work I have been doing, giving me the time and the tools I need to go out and shoot and bring those experiences back to the classroom.”

One of Donaruma’s most recent film projects premiered in Rome as part of an exhibit called “Revisiting the Roman Forum: from Pen to Pixel, Methods of Documentation in the 20th and 21st Centuries.” The exhibit, part of The Digital Future of World Heritage symposium, ran from April 4 through Oct. 31.

In partnership with the Sopritendenza Speciale Beni Culturali and Rome’s Ministry of Culture, DHARMA combined detailed historic texts and drawings with traditional hand-measuring techniques and new digital technology to document the Roman Forum in 3D for the first time.

“The Roman Forum project was very labor intensive, but very rewarding in that it incorporated facets of production I had not tackled before and the subject was fascinating,” Donaruma said. “Getting those sunrise and sunset shots on the last day of a rainy week was very gratifying as well as being allowed in areas of the Forum that have not been open to the public for a millennium.” 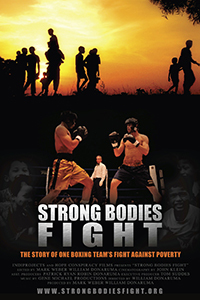 In 2008, Donaruma’s work took him to Bangladesh as director and co-producer of Strong Bodies Fight, an award-winning film about the University of Notre Dame’s Bengal Bouts charity boxing tournament. The annual event has raised more than $1 million since the 1930s to support Congregation of Holy Cross missions in the poverty-stricken nation.

Mark Weber ’09, who majored in FTT and the Program of Liberal Studies, approached Donaruma about the project while serving as student president of the Notre Dame Boxing Club.

The film chronicles the transformational experiences of five student boxers who traveled to remote villages in Bangladesh to see the missions’ impacts firsthand.

“It was a new experience and an important cause,” Donaruma said. “The project furthered the Notre Dame mission and turned out to have a very, very beneficial impact on the tournament and the charity.”

Since 2012, Donaruma has also partnered with Notre Dame anthropologists on a project called Cultural Landscapes of the Irish Coast, which focuses on the abandoned island of Inishark as “a window” to Irish life in the 19th century.

“Some people think they experience Ireland by taking a trip to Dublin, but this is the real Ireland,” he said of his experiences on Inishark and the nearby coastal island of Inishfobin.

“The people are really what make the islands special. I miss them as soon as I leave, and I have made very special friends from being there. I honestly can’t imagine not going back.”

Donaruma has made a total of nine short documentary videos for the project to date. He was also on the two islands in May, assisting with 3D scans of Inishark and shooting pieces on Inishbofin for the upcoming book Island Lives, Island Places. Some of the videos are available on Donaruma’s Vimeo page.

“Eventually,” he said, “I plan to produce a longer piece that chronicles the entire experience of a remote dig, what we found, and other activities and life that still exists on the island of Inishark.”

Donaruma is also working with Anthropology Professor Ian Kuijt on a team-taught class that will incorporate ethnographic documentary and focus on the work they have been doing together in Ireland. 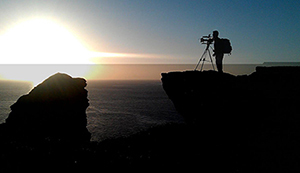 Ireland is at the heart of another of Donaruma’s myriad projects—Hear My Heart, a documentary he’s been working on for several years that examines the spiritual side of the band U2.

“The project is really a labor of love that my wife still gets on me about pushing forward,” Donaruma said.

He also was behind the camera on NightLights, a short, fictional drama that premiered in Los Angeles in August about a young woman raising her autistic adult brother. He worked on the film with former FTT student John Klein ’06.

“It was a great experience doing that movie, working with John, and seeing how it progressed,” Donaruma said.

“Fiction work is really a passion that I want to push further in the coming year,” he said.

“I stress the importance of quality images, which I strive for in narrative and documentary films, because I feel images really tell the story and captivate an audience. Thematically, I like the blurred line between reality and what may be fantasy in storytelling. I am drawn to that element of ambiguity.”

“In class, I also emphasize what it takes to succeed working in various positions on a set or working independently,” Donaruma said.

“Production is a physically and mentally taxing occupation and you need to be ready for it.”