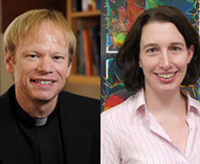 Notre Dame political scientist Rev. Robert Dowd, C.S.C., and economist Molly Lipscomb have teamed up to conduct a randomized controlled trial in 250 villages of rural Uganda, where contaminated water is a major cause of health problems and premature death. Funded by a $279,000 grant from the John Templeton Foundation, the study will assess whether religious or political leaders are more effective at promoting health-enhancing behaviors.

“We hope that the results of this study deepen our understanding of whether, how much, and why religion and religious networks matter when people in developing countries make important decisions that affect their health and the well being of their families,” Dowd says.

The researchers will zero in on whether religious leaders or political leaders are more persuasive at encouraging people to purchase and use tablets that make water safe for drinking. The chlorine-based tablets offer a more thorough and environmentally friendly way of purifying water than the common practice of boiling water over fires of wood cut from depleted forests.

In some villages, local Catholic, Protestant, or Muslim religious leaders will encourage people to purchase and use water-purification tablets. In other villages, local political leaders will do the same. Dowd and Lipscomb will compare the sales and household use of the tablets across the randomly selected villages to ascertain the effectiveness of the different types of leaders.

“While there is anecdotal evidence to suggest that religious leaders and religious networks are very influential and well-suited to promote health-enhancing behaviors in some of the poorest parts of the world, there has been a lack of hard evidence,” Dowd says.

The results of this interdisciplinary research promise to help policy makers in developing countries gauge the most effective ways of channeling resources to implement large-scale public health interventions.

The Templeton grant will allow the two College of Arts and Letters scholars to build on research they began in July 2011, thanks to funding from the London-based Tony Blair Faith Foundation and Notre Dame’s Kellogg Institute for International Studies, where they are both faculty fellows.

The John Templeton Foundation supports social science research that explores moral and spiritual concepts such as altruism, generosity, and purpose.