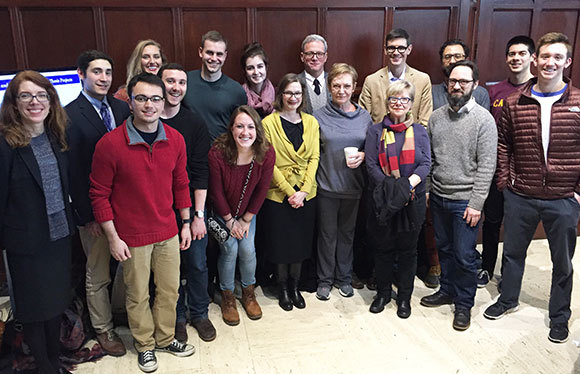 English majors and their research advisers gather at an April reception in the O’Shaughnessy Great Hall honoring 2016 senior thesis students and advisers.
_______________________ 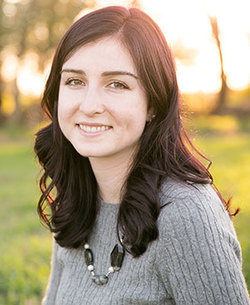 When Elizabeth Troyer began diving into her senior thesis research, she wasn’t alone.

“Having a group of people doing it with me was a great way to start, to see if my idea was feasible and what new directions it needed to go to become an actual thesis,” said Troyer, who is writing about Virginia Woolf. “Mine changed a lot from the beginning. I couldn’t have predicted that, and a lot of that came from my classmates’ input.”

Troyer is one of 17 seniors in Notre Dame’s Department of English honors concentration—all of whom participated in a colloquium last semester with Assistant Teaching Professor Elizabeth Evans as they embarked on their senior thesis projects.

Students in the class discussed their thesis research in small groups, offered feedback, completed outlines and bibliographies, and shared presentations on their main ideas with the class.

The colloquium is just one example of how faculty members have worked to build a sense of community in the department and in the honors concentration, Evans said.

“One of the real benefits of the concentration is that these students get the chance to know each other quite well and support each other,” she said. “One student might be working on Shakespeare while someone else is working on David Foster Wallace, but they have productive conversations and encourage one another in that process of researching and writing a thesis.”

John Oakley, an English and psychology major, is focusing his thesis on how a character’s psychopathology influences narrative structure in a novel. He said the colloquium helped him create the structure of his thesis—making the writing process much easier.

“It helped me conceptualize what a thesis should be, because it’s something I’ve never done before,” Oakley said. “By compiling sources, making annotated bibliographies, and getting all the resources I’d need later, it made me aware of the scope of the project. And it made it much more real, rather than just a lofty aspiration.”

Oakley plans to attend a Ph.D. program in clinical psychology—and chose to do a thesis, in part, because it will prepare him well for graduate school.

“All the tools of doing such a big project are helpful,” he said. “Being able to critically engage with articles—finding an article to support your argument and finding an article you have to argue against to defend your position—will be a really valuable skill when I’m trying to propose my own research ideas in clinical programs.”

Professor Greg Kucich, director of undergraduate studies for the department, said that type of engagement is a key part of what makes the senior thesis experience so exciting—for students and faculty.

“The students writing senior theses will engage with contemporary literary scholars, respond to their work, and then develop original insights of their own,” Kucich said. “So the students’ intellectual community is expanding outside of Notre Dame into the international community of scholars working on that topic, and that’s a really exciting step.

“It is raising the bar significantly from the work that most students will do, even at the senior level. And it means they’re operating at a nearly professional level of academic work.” 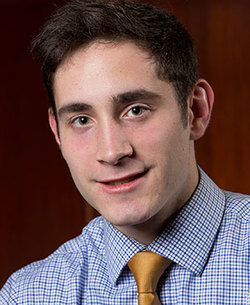 English and German major Charlie Ducey’s thesis examines the concept of fragmentation as it relates to The Pale King, an incomplete novel by David Foster Wallace. In the honors colloquium, he worked with a fellow student who was also researching three novels by Wallace, including The Pale King.

“It was interesting to hear about his approach and the connections he’s drawing between the three works,” Ducey said. “I don’t have as much experience with those other two novels, and it definitely made me consider his final work in a different light.”

In addition to the colloquium, students in the honors concentration meet regularly with a faculty adviser throughout their senior year to discuss their thesis projects. 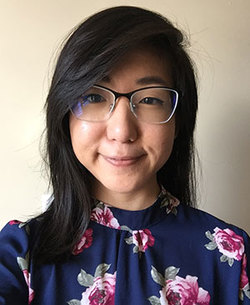 “To have that one-on-one experience sustained over an entire year is invaluable,” Kucich said. “Many graduates tell me that that relationship was the richest academic experience they had at Notre Dame.”

Bui is exploring themes of silence and the Asian-American experience, as well as how the use of multicultural literature in education may encourage minority students to become more involved in the classroom.

Greene and Bui have both been excited to see how her writing and analysis skills have progressed over the years, she said.

“It’s been wonderful and really motivating to have a thesis adviser who’s known me since the beginning,” Bui said. “He is very encouraging; he understands how passionate I am about the topic and he sees where I want to go.

“He’s always telling me, ‘This is exactly the point of a senior thesis—to continue the research you’ve been doing for the past four years, see it through, and see how it all adds up at the end.’”