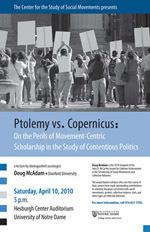 Doug McAdam, professor of sociology, director of urban studies, and director emeritus of the Center for Advanced Study in the Behavioral Sciences at Stanford University is the 2010 recipient of the John D. McCarthy Award for Lifetime Achievement in the Scholarship of Social Movement and Collective Behavior. The award will be presented to McAdam at the University of Notre Dame on April 10, 2010.

The McCarthy Award is given annually by Notre Dame’s Center for the Study of Social Movements (CSSM). In announcing the honor, the award committee chair, Dan Myers, professor of sociology and associate dean in the College of Arts and Letters, expressed his pleasure in the opportunity to celebrate McAdam’s work and leadership.

“Doug embodies the criteria for the award as both a leading voice in the research and theorizing of social movements for many years and someone who has made inestimable contributions to the development of younger scholars,” he says.

The award ceremony will take place in conjunction with CSSM’s Young Scholars in Social Movements Conference, a gathering of distinguished graduate students and recent Ph.D.s from around the country. More than a dozen young researchers will have the opportunity to present “works in progress” for feedback from McAdam and a panel of leading social movement scholars.

An Award for Scholarship

CSSM established the McCarthy Award in 2007 to recognize scholars who have made “outstanding contributions to the scholarly literature concerned with social movements, protest, collective violence, riots, and other kinds of collective behavior.”

In his nomination of McAdam, Jack Goldstone, Virginia E. and John T. Hazel Jr. Professor of Public Policy at George Mason University and editor of Foreign Policy Bulletin, notes, “There should be little doubt that McAdam’s scholarship has shaped the modern study of social movements as much or more than any other scholar.

McAdam will present “Ptolemy vs. Copernicus: On the Perils of Movement-Centric Scholarship in the Study of Contentious Politics” on April 10 at 5 pm in the Hesburgh Center for International Studies auditorium. His talk will be followed by the award banquet at 7 pm in McKenna Hall.

McAdam’s current projects include a follow-up study of Teach For America participants to assess the “civic effects” of the experience. He is also studying neighborhood activism in Chicago from 1970 to 2005 to understand the factors and processes that shape the capacity of neighborhood groups to act on their own behalf.