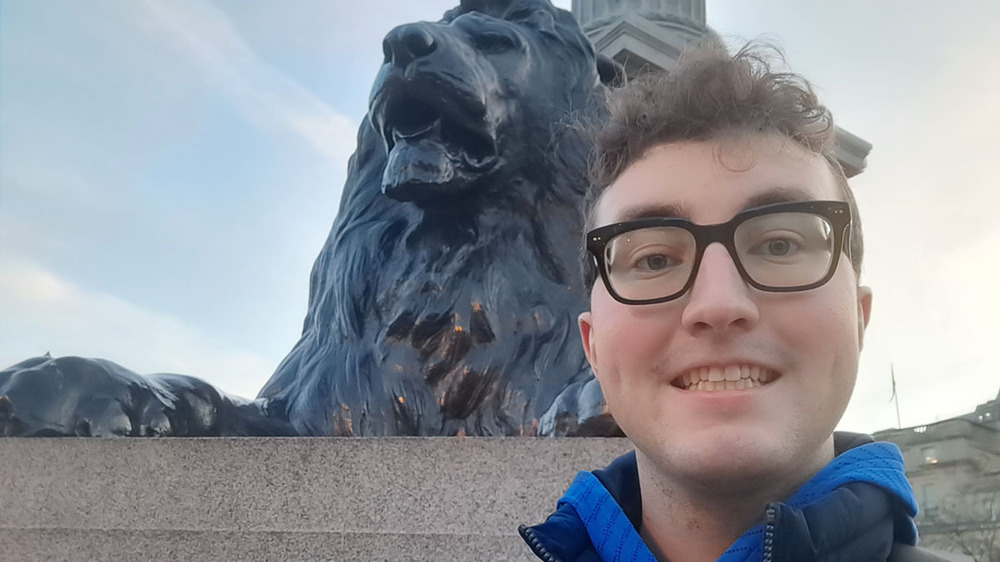 Eoghan Fay ’23, a major in history with a minor in European studies, received a Spring Break 2022 Research Grant from the Nanovic Institute for European Studies to conduct research for his minor capstone project on the British withdrawal from Greece in 1946 and its significance for declining great power politics. Eoghan shares some of his experiences visiting and undertaking research in London.

“Just take a minute to appreciate this, folks,” Fr. Bill Miscamble, C.S.C., professor in the University of Notre Dame’s Department of History, told our U.S. Foreign Policy in the Cold War class in a serious tone. “This is the great British Empire saying it can’t afford it anymore.” Sticking my pen in my mouth and looking away from the chalkboard for just a moment, the realization struck me: the British decision to withdraw financial support from the Greek government during the country’s civil war in 1947 was a watershed moment in imperial history.

Fast forward a few months, and I needed to settle on a capstone project topic for my Minor in European Studies. The memory of the significance of Britain quitting Greece remained at the forefront of my mind and I knew I had my project. I approached my old professor Fr. Bill to serve as my advisor on the project, and I remain extremely grateful to him for his guidance.

Often seen as the prelude to the Truman Doctrine, Britain provided financial and military support to the Greek government in its struggle against communist “bandits” from 1945 to 1947. With the British Empire’s finances in perilous condition after World War II, the Labour Party government of Clement Attlee sought to cut back Britain’s monetary commitments. Greece, however, presented a conundrum. Lying in the eastern Mediterranean, a communist Greece could have jeopardized British interests in the Middle East and the Suez Canal. As such, the cash-strapped Britons appealed to the U.S. to take on the task of supporting Greece, a key moment in the development of the Truman Doctrine of 1947. My interest is in understanding the inner workings of the British government during this shift in foreign policy and how the decision-makers in London came to terms with their declining power in international geopolitics.

To support my research, I was fortunate to receive a spring break research grant from the Nanovic Institute for European Studies. Passport in hand, I found myself destined for the British National Archives in London to examine historic documents surrounding the British decision to leave Greece and pass the issue over to the U.S. I spent a few days at the start of my journey in my native Dublin before taking a short early morning flight to London Heathrow. Landing before 9:30 a.m., I was able to take the Underground to Kew for my first day of research at the National Archives where I spent the next four days reading through copious government documents.

My personal favorite documents were the Foreign Office telegrams, especially those in which the author was annoyed for one reason or another but could only express their frustration in a formal diplomatic register. For example, after chastising the Greek government at length in a letter to its Foreign Minister, British Ambassador to Athens, Sir Clifford Norton, signed off with “I avail myself of this opportunity to renew to you, Monsieur le Ministre, the assurance of my highest consideration.”

Since my hotel was just a twenty-minute walk from the archives, I was able to spend long days with the documents. My phone now contains dozens of photos of telegrams, memos, and reports, and I nearly filled an entire copybook with notes. The archivists were friendly and helpful, and the reading room was comfortable for long workdays. My only complaint with the whole process was the confiscation of my pencils that had erasers at the end! Evidently, these are not permitted in the reading room.

Of course, one does not go all the way to London just to see old documents. The National Archives are just across the road from the Kew Gardens Underground/Overground station, from where you can easily get into the center of London, so in the evenings, I headed into town and walked around the sights. I especially enjoyed seeing Big Ben, which is now mostly uncovered following a lengthy £80 million refurbishment. The world’s most famous clock is truly looking great these days! Since London is easy to walk around, I also saw Leicester Square, Downing Street, and the Foreign Office (the subject of much of my research). London looks beautiful in the late evening glow and the crowds also tend to be thinner.

At the end of the week, I headed home with a suitcase full of souvenirs, a legal pad full of notes, and a head full of memories. I am extremely grateful to the Nanovic Institute for this chance to conduct in-person research that I enjoy and see a city I have long loved. Next semester, I will get to work on my capstone project using the research from this trip, and on my desk sits a reminder of my fantastic spring break in London: a miniature Big Ben.

Originally published by Eoghan Fay at nanovicnavigator.nd.edu on April 06, 2022. Nanovic Navigator is a platform for stories told by students about their experiences exploring Europe and European studies through the support of the Nanovic Institute.