David Campbell, John Cardinal O’Hara, C.S.C., Associate Professor of Political Science at the University of Notre Dame, and Robert Putnam of Harvard University are the 2011 recipients of the Woodrow Wilson Foundation Award for their book American Grace: How Religion Divides and Unites Us.

The American Political Science Association awards the prize annually to the best book from the past year on government, politics, or international affairs.

“Bob Putnam and I set out to do something that is increasingly rare: write a serious but engaging book for both a scholarly and public audience,” Campbell says. “This award is especially gratifying, since it indicates that our work ‘passes muster’ among our academic colleagues.” 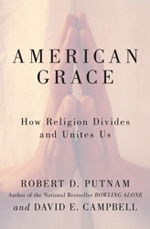 For American Grace, Campbell and Putnam conducted some of the most comprehensive studies ever conducted about religion in American society and examined the ways religion influences the nation’s political and civic life.

Additionally significant were the discoveries that Americans have begun switching their religion to match their politics—rather than the other way around—and that most Americans (including those who are secular) believe that people who are personally religious are more trustworthy and make better leaders.

“The book deepens our understanding in a wide variety of ways,” the Woodrow Wilson Award committee notes. “Its analysis brings richness of detail and social scientific rigor to some of our most important and enduring political questions.”

It adds, “We applaud the authors’ painstaking diligence in so thoroughly cross-checking their findings and also their capacity to present the results of their work in such readable prose and clear graphic form.”

Notre Dame President Emeritus Rev. Theodore M. Hesburgh, C.S.C., calls the book a “must-read” for anyone interested in the role of religion in America’s civic life.

“Their findings from rich case studies and sophisticated analysis of original national surveys will be of great value to academics, politicians, community organizers, religious and non-religious leaders, and American citizens who wonder about why and how religion continues to matter so much in American civic and private life,” he says.

American Grace was also honored by the Religion Communicators Council, which awarded Campbell and Putnam its 2011 Wilbur Award for the Best Nonfiction Book.

Campbell is the founding director of Notre Dame’s Rooney Center for the Study of American Democracy and focuses his research on religion, politics, and civic engagement. He is the author of Why We Vote: How Schools and Communities Shape our Civic Life and editor of A Matter of Faith: Religion in the 2004 Presidential Election.

With funding from the National Science Foundation, Campbell is beginning a new project with Geoffrey Layman, associate professor of political science at Notre Dame, and John Green at the University of Akron to study the political implications of the rise in secularism.