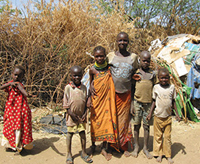 Kakuma Camp 2, Kakuma Refugee Camp, Kenya. Turkana children mind each other in open spaces in the camp while their mothers go to work, either for the refugees or heading out to search for building material in the countryside.

The 90,000-person Kakuma Refugee Camp, in the Turkana District in northwest Kenya, has grown into the equivalent of a permanent city—with the same level of inequity, violence and informal (black market) economic systems as urban slums, says Rahul Oka, Ford Family Assistant Professor of anthropology and concurrent assistant professor in the Department of Africana Studies.

Oka has conducted five seasons of ethnographic research in the camp, where refugees from war—from southern Sudan, Somalia, Ethiopia, Eritrea, Congo, and Uganda—co-exist.

Relief agencies don’t acknowledge the role that traders play in the informal economy. “They know it operates, but they don’t know exactly how.”

Oka’s research, supported by the Institute for Scholarship in the Liberal Arts, the Seng Foundation and the Kellogg Institute for International Studies, has shown that the informal economy—where traders and consumers actively buy, sell, and trade—plays a vital role in the life of the camp. 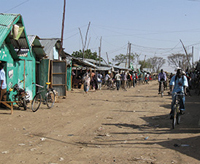 The main street of Kakuma Camp 1, Kakuma Refugee Camp, Kenya. Along the street are businesses such as electronics stores, clothing and perfume shops, groceries, schools, hair salons, and restaurants.

Although distribution of relief through formal channels often faces significant obstacles, Kakuma, he notes, is home to a thriving informal economy that includes more than 500 retail and wholesale shops, as well as restaurants, bars, and nightclubs—all supplied via predominantly Somali traders and merchants.

Local traders, he’s discovered, are far more efficient at distributing goods than the NGOs. “Although traders come and go, the network itself is stable and resilient. They know each other through the network—and it enables trade to continue in war zones where formal institutions may not exist.

Oka is currently engaged in an ongoing collaboration with the iCeNSA Network (the University’s Interdisciplinary Center for Network Science and Applications), investigating the ways the scale of trading changes as the size of the camps grow, and how external forces affect the structure of the networks over four to five years. 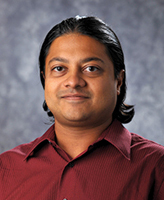 Doing research in African conflict zones is difficult, he acknowledges.

Oka had a comfortable upbringing in India, “but my family never tried to gloss over the issues of poverty and privation and human suffering. Part of the reason so much was invested in my education was so something could be given back to the world.”

He remembers leaving a restaurant with his brother and grandmother in Pune, India, in 1981, when a violent Hindu-Muslim riot broke out.

“People were screaming and running. There were wounded and dying people in the streets. An Irani hotel, the four-story Hotel Sunrise, went up in flames. It doesn’t give you a good glimpse of humanity. And this was in an urban area in a state where institutions exist.”

Over the course of his research in Africa, he says, “I’ve seen things no one should have to see. After a militia raid, you see burned dwellings. You see people crying. You see people dead.”

In earlier times, he notes, tribespeople had a saying—when confronted by marauders, they would hold up their spears and say, “Take the cattle.”

“Now, with the proliferation of small arms, conflicts end in massacres, in rape.” 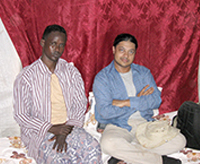 In Kakuma Camp 1, Oka has celebratory tea and cakes with a man who has just learned he and his family will be en route to the U.S. within two weeks

The hardest part is the children, he says. “You have to look away at times. You can’t apply the normal rules, your ideas of what children do. You see a girl of 5 helping her mother drag thorny bushes across the baking heat of the landscape, for others to make fences.

“These children have lost a lot of people close to them. They’ve seen their parents struggle to get them on the road to receive refugee rations. When cholera strikes the camp, it’s a dreadful thing to see. I was in Nairobi during the famine and saw refugees streaming in. It was a humbling thing—that’s why I’m doing this research.”

The thing that drives him to return is the people, Oka says. “I’ve made wonderful friends. Some of my best information comes from sitting down with a large group of people of various ages and genders. In small towns, drinking tea and smoking—everyone smokes, so you smoke too. There comes a point where all barriers break down.”

One thing he’s learned is the importance of “normal” for refugees.

Refugees may be collecting bland food from the United Nations World Food Programme, but they will still celebrate the birth of a baby with sweets. Tea and soft drinks will be acquired and shared at the funeral of an older relative. It creates a degree of normalcy.

“Dignity is what keeps them going from year to year, sometimes decade to decade,” Oka says. “If there’s any lesson here, it’s that humans have tremendous adaptive capacity. I’m hopeful, because the alternative would be to give up.”