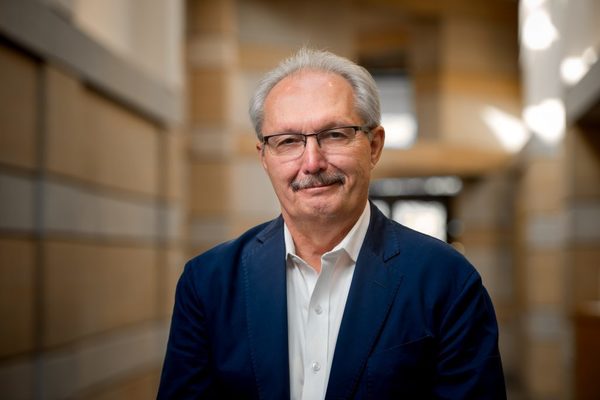 The Ambassador Award is presented each year to a person or organization that has worked to promote the relationship between the people of the Republic of Ireland and the people of the United States. In announcing the award, the Holyoke organizers noted Fox’s leadership of Notre Dame’s Keough-Naughton Institute for Irish Studies, which he co-founded with Seamus Deane in 1993 and led as director from 2001 through 2017.

Fox, currently a Keough-Naughton faculty fellow, is the 28th recipient of the Holyoke Ambassador Award. Other recipients include the prominent Irish musician Tommy Makem.

“I am honored to accept the 2019 Ambassador Award not simply for myself but on behalf of students and my colleagues in the Keough-Naughton Institute for Irish Studies at the University of Notre Dame,” Fox said. “I also accept the award in recognition of Notre Dame’s deep and lasting ties to Ireland that date back to the University’s founding in 1842.”

There is also a deep and abiding relationship between Holyoke and Ireland, and Holyoke and Notre Dame. The Notre Dame “Victory March” was written by Irish-Americans Father Michael Shea and his brother John Shea, both Notre Dame graduates, and had its very first performance at the Second Congregational Church in Holyoke in the winter of 1908. The Notre Dame Band first performed the march on the steps of the Administration Building in 1909.

After co-founding the Institute in 1993, he established The Irish Seminar in 1999 to connect the Institute’s research agendas and its graduate students with Notre Dame’s international center in Dublin. The IRISH Seminar has convened every summer (to date, in various years, in  Dublin, Paris, and Buenos Aires) to bring together Irish scholars, graduate students, and faculty in Irish Studies.  An intense intellectual exchange and experience, the seminar has been a formative experience for scores of Notre Dame graduate students and their peers from universities around the world.

One of Fox’s many roles as director of the Keough-Naughton Institute was serving as executive producer of the landmark documentary 1916 The Irish Rebellion — a role that was particularly noted in his citation for the Ambassador Award.

The Holyoke St. Patrick’s Day Parade, which will take place the afternoon following the ceremony at which Professor Fox’s award is bestowed, has drawn up to 400,000 spectators in the past.