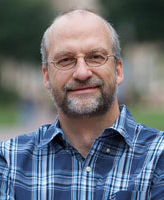 University of Notre Dame Professor Christian Smith has won the 2012 Distinguished Career Award from the Altruism, Morality, and Social Solidarity section of the American Sociology Association (ASA). The accolade, presented at the ASA’s annual meeting in August, recognizes a senior scholar who has made significant contributions to the section’s areas of focus over an extended period of time.

Smith says the acknowledgement is a true honor. “I think the award reflects a recognition among my colleagues that the various strands of my research and publishing on generosity, adolescents, theory of human personhood, religion, and even political activism share a common theme that takes morality and self-giving seriously,” Smith says.

“A lot of social science does not do that, so it is good to have that recognized.”

Smith, the William R. Kenan Jr. Professor of Sociology in Notre Dame’s College of Arts and Letters, is a concurrent professor in the Department of Theology and director of both the Center for the Study of Religion and Society and the Center for Social Research.

Over the past few years, he has won numerous awards for his research and publications. One of his most recent books, What Is a Person?: Rethinking Humanity, Social Life, and the Moral Good From the Person Up, was named one of Choice magazine’s Top 25 Academic Titles of 2011, won the 2010 Cheryl Frank Memorial Prize from the International Association for Critical Realism, and received a 2010 PROSE Award honorable mention in the philosophy category at the American Publishers Awards for Professional and Scholarly Excellence.

“I live a privileged academic life,” he says. “I am very grateful for that. Notre Dame is also an excellent place to do the kind of work I do, so I am very happy to be here.”

Currently, Smith is finishing up research for the College’s Science of Generosity initiative, a project funded by a $5 million grant from the John Templeton Foundation that brings together the often disconnected and diverse approaches to generosity in order to research it in all its forms. He plans to write at least one book based on his findings.

He is also completing the fourth and final wave of the National Study of Youth and Religion, a longitudinal panel study of teenagers and emerging adults. Research so far on this project has yielded multiple books, including Souls in Transition: The Religious and Spiritual Lives of Emerging Adults and Soul Searching: The Religious and Spiritual Lives of American Teenagers. In 2011, the Lilly Fellows Program in the Humanities and the Arts awarded Souls in Transition its Lilly Fellows Program Book Award.

Smith also recently received a planning grant from Lilly Endowment Inc. to do background work on a potential study on parenting in the United States.

“I will continue to do much the same kind of work I have already done,” he says, “but it is encouraging to have a sense that somebody out there is benefitting and appreciating.”