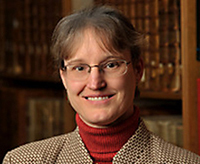 Notre Dame historian Olivia Remie Constable has been awarded a fellowship from the John Simon Guggenheim Memorial Foundation for her book project Christian Perceptions of Muslim Identity in Medieval Spain.

Among other things, her work will examine Christian attitudes toward Muslim dress and appearance and whether Muslims could engage in public religious expressions, teach Arabic to their children, and maintain bathhouses, schools, cemeteries, and other separate spaces important to the continuity of their culture and religion.

“Over the period that my study covers, Christian attitudes changed dramatically about all of these things,” Constable says.

A professor in the Department of History and director of the University’s Medieval Institute, Constable specializes in the social, economic, and cultural history of the Mediterranean world, particularly the Iberian Peninsula. Her current research focuses on the time between the 12th and early 16th centuries.

“This was a period after Christians had conquered large areas that had once been in Muslim control, and so there were Muslims living under the administration of Christian rulers,” she says. “I am looking at how this relationship worked and at Christian understandings of what was needed for Muslim neighbors to remain Muslim.”

In the century or so after the conquests, she says, Christians generally accepted the distinctive Muslim religious practices and ways of life. But over time, Christian attitudes became less and less tolerant.

“Eventually, in Spain, the Christian administration decided it was no longer possible for Muslims and Christians to live together, and all Muslims were expelled from the Iberian Peninsula,” Constable says. “My research looks at how—and why—this change in attitude took place.”

Out of several thousand applications each year, the Guggenheim Foundation selects approximately five percent as fellows, based on exceptional academic achievements and on continued promise of exceptional work in the future. Two of this year’s winners are from Notre Dame—both of them medievalists.

In addition to Constable, Margot Fassler, Keough-Hesburgh Professor of Music History and Liturgy in the Department of Theology and co-director of the Sacred Music at Notre Dame initiative, won a 2012 Guggenheim fellowship for her research on Hildegard of Bingen.

“Needless to say, I am delighted to receive this award,” Constable says. “It is an honor in itself, but I am also happy to have the time to spend on my research and writing.”