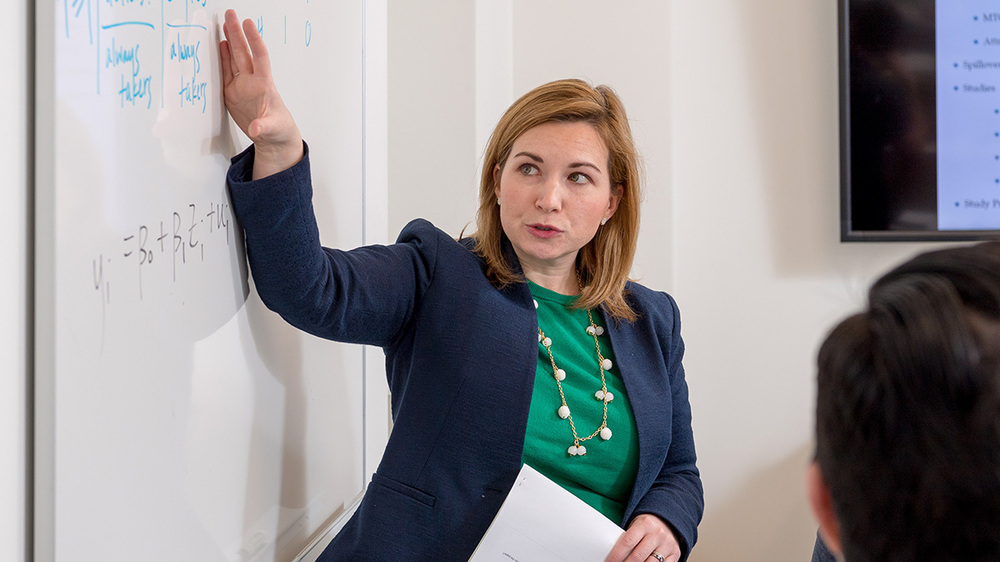 Chloe Gibbs, assistant professor of economics at the University of Notre Dame, has been appointed to a one-year term as a senior economist on the Council of Economic Advisers (CEA). The council is charged with offering the president of the United States objective economic advice based on data, research and evidence to support the formulation of both domestic and international policy.

“We are obviously facing economic challenges in the wake of the pandemic. I am thrilled to have the opportunity to serve in this capacity, and hope I can use my skills and expertise to solve problems that affect people’s daily lives, particularly those of children and families,” said Gibbs, whose tenure begins this month.

The CEA is led by a chair who is appointed by the president with the advice and consent of the Senate, and two members who are appointed by the president. With a staff of senior economists, staff economists, research assistants and supporting administrators, the council analyzes and interprets economic developments and formulates and recommends economic policies that advance the interests of the American people.

A labor economist who specializes in the economics of education, Gibbs focuses on measuring the effects — both intended and unintended — of policies and programs targeted at helping disadvantaged children and families. Much of her research investigates early childhood care and education, parenting, and successful transitions into and out of formal schooling.

One of the most pressing issues for working parents in the United States is the availability and cost of child care. Along with seven other economists, Gibbs recently conducted a study that modeled two different policy scenarios that involved expanding federal funding for early child care and education subsidies — one narrow and one broad. While child care costs have increased over the past 15 years, the authors find that “a broad expansion of childcare subsidies would substantially reduce the costs that households pay on average for childcare.”

Indeed, their research showed that a broad expansion would lower average household expenditures significantly from about $8,100 per year to approximately $5,000 — a decline from nearly 18% to 6% of after-tax income. Under the narrow subsidy expansion, the reduction in household costs is more modest, with average household expenditures (for full-time care) falling from approximately $8,100 (close to 18% of income) to $7,700 (12% of income). The study also predicts increases in maternal employment and improvements in care quality under both subsidy schemes, with the most pronounced benefits among low-income families.

Gibbs has also studied various aspects of the federal Head Start program that launched in 1965 as part of President Lyndon B. Johnson’s War on Poverty. Her most recent related research (with colleague Andrew Barr from Texas A&M) was the first to show large-scale intergenerational effects of the program. Their study documented effects in the second generation — the children of those who went through Head Start — including decreases in teen parenthood (by 8 percentage points) and criminal engagement (by 13 percentage points) and increases in educational attainment (high school graduation by 11 percentage points and college enrollment by 18 percentage points). The study also found shorter-term effects for the second generation that may explain the long-term effects, such as better home environments, greater preschool participation, higher self-esteem, lower likelihood of repeating a grade and less criminal engagement in adolescence.

“Chloe is a recognized academic leader in the areas of schooling and education,” said Michael P. Grace II Professor and Department Chair of Economics Eric Sims. “We are fortunate that she will be putting her expertise on these and related topics into practice in service to our country on the Council of Economic Advisers. We are extremely proud of her and are lucky to count her as a member of the Notre Dame family.”

Gibbs is also an affiliate of the Wilson Sheehan Lab for Economic Opportunities and serves as the director of Notre Dame’s Program for Interdisciplinary Educational Research at the Institute for Educational Initiatives.

Originally published by Colleen Sharkey at news.nd.edu on July 18, 2022.