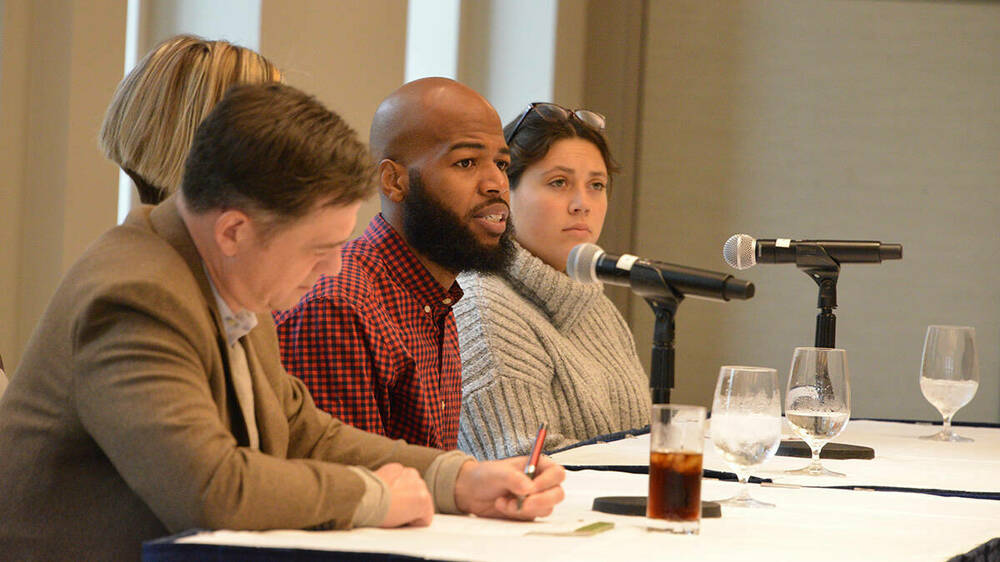 The Center for Social Concerns celebrated the launch of Notre Dame Programs for Education in Prison (NDPEP) with a lunch and panel discussion Wednesday (Nov. 16), featuring John McGreevy, the Charles and Jill Fischer Provost at the University of Notre Dame, as well as graduates of various NDPEP programs and others.

In collaboration with Holy Cross College, Marian University, the Bard Prison Initiative and the Indiana Department of Correction, NDPEP reorganizes a number of new and existing education programs under a single umbrella within the Center for Social Concerns.

Among other things, it will:

Speaking at the lunch were McGreevy; Suzanne Shanahan, the Leo and Arlene Hawk Executive Director of the Center for Social Concerns; Michael Hebbeler, managing director of NDPEP; Max Kenner, founder and executive director of the Bard Prison Initiative; and Christina Reagle, commissioner of the Indiana Department of Correction.

A resident of Nappanee, Hochstetler earned her associate degree from Marian University while serving a 12-and-a-half-year sentence at the Indiana Women’s Prison in Indianapolis. She is currently pursuing her bachelor’s degree from Marian, with the aim of becoming a youth advocate.

She credited the Women’s College Partnership with restoring her sense of self-worth.

Foggie, who’s also pursuing his bachelor’s degree after earning his associate degree in prison, expressed a similar sentiment. He served five years at Westville Correctional Facility. He was recently released from parole.

“It gave me ownership, ownership of my dreams,” Foggie said.

Speaking to the faculty in the room, he said, “Not one time did any of you guys give me any doubt in myself. And that’s one thing when you go to prison that’s instantaneous: doubt. It’s everywhere. You don’t know what’s going to happen the next day. I don’t have that doubt anymore.”

The Center for Social Concerns is an interdisciplinary institute dedicated to justice education and research for the common good with communities near and far.

Originally published by Erin Blasko at news.nd.edu on November 18, 2022.