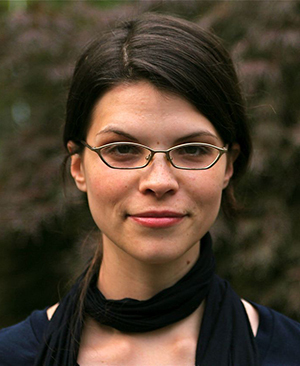 Sarah Ann Wells, assistant professor of Portuguese and Spanish in Notre Dame’s Department of Romance Languages and Literatures, has long been fascinated by film and media studies and by the modernist period.

“My book analyzes the shifting relationship between literature and media in the 1930s and 1940s in Brazil, Argentina, and Uruguay,” Wells said. “It joins a growing body of scholarship on non-Western approaches to communication technologies, which together shape a truly global understanding of modern media networks.”

Wells, also a faculty fellow in the Kellogg Institute for International Studies, brings her research into the classroom through courses on literature and audio-visual media in Spanish, Portuguese, and English. One key component of these classes, she said, is giving students an opportunity to place different media into dialogue with one another.

“This fall, for example, we’re reading a well-known poem by a Brazilian modernist writer, and seeing how it was adapted for the theatre and then into a soap opera,” she said.

“Placing media against each other allows us to see their specificity and also to understand the different historical contexts in which they emerge.”

Wells often sees her undergraduate courses as laboratories, she said, where together, she and her students work out problems related to media, both old and new.

“My students are almost always more technologically advanced than I am, and they help me think about the contemporary implications of the problems that interest me.”

Her research has also inspired Wells to offer a graduate-level course this fall, titled Media Fictions of Spanish America and Brazil. The course, which follows a rough chronology from the arrival of cinema to Latin America at the end of the 19th century to the status of literature and cinema as late media today, includes texts in Spanish, English, and Portuguese.

The Portuguese language program at Notre Dame, Wells said, is vital, and she hopes to see it continue to grow—not only within her own department, but also in collaboration with other departments such as history and anthropology.

“This will allow us to focus not just on language, but on a wide variety of content related to Brazil and the Lusophone world,” she said. “Brazil should have a major role in the Notre Dame curriculum and on campus.”

For the spring 2015 semester, Wells looks forward to offering a course in Portuguese on Brazilian short stories. She is also enthusiastic about teaching a senior seminar course for undergraduate Spanish majors on media fictions in South America.

“We’ll be reading bizarre and compelling stories, many of them from the tradition of fantastic literature, about encountering and imagining media in the 20th and 21st centuries.”

In addition to modernism, film, and mass culture, Wells’ research interests include science fiction, translation, and theories of labor. She has produced a co-edited volume on global science fiction cinema and is now beginning research for a monograph on embodiments of labor in contemporary Argentine and Brazilian cinema. She has also translated several creative and scholarly works from Latin America.

Wells, who joined the faculty of the College of Arts and Letters in 2012, said she is thrilled to be part of the Notre Dame community.

“It is challenging in the best possible way,” she said.

“The high level of research of the faculty and the work ethic of the students keep me on my toes, both within and outside the classroom.”