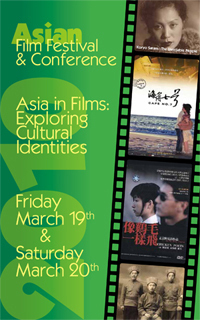 Showcasing the creativity of contemporary Asian filmmaking, the University of Notre Dame’s annual Asian Film Festival will bring five films to the Browning Cinema of the DeBartolo Center for the Performing Arts Friday and Saturday, March 19-20, 2010.

“It’s a rare opportunity to see films exploring Asian identities in the context of globalization, dislocation and migration,” said Sylvia Lin, associate professor of East Asian languages and cultures, who served on the student-faculty committee that organized the event. “Most of the films will be screened for the first time in the U.S. here at Notre Dame.”

“The festival gives people an opportunity to learn about other cultures and values,” said Notre Dame senior Sunny Chung, who co-chaired the festival committee with sophomore Priscilla Choi.

Choi points out that the films illustrate how different Asian peoples are dealing with change.

“I am excited to share films that deal with identity,” she said. “Koreans who were deported to Central Asia by Stalin, the dilemma of the Taiwanese aborigines who are on the crossroad between modernization and tradition, for example.”

Film director Y. David Chung will kick off the screenings by introducing his documentary, Koryo Saram: The Unreliable People and taking part in a post-screening Q&A on Friday evening.

Enriching the festival is an academic panel featuring Chung; Nicholas Kaldis, the director of Chinese Studies at Binghamton University (SUNY); and Brandon Frost, a 2009 graduate of Notre Dame. Frost, who was instrumental in organizing previous festivals, is now a graduate student in East Asian languages and cultures at Columbia University.

Students who participate in festival offerings including the academic panel can register beforehand to receive academic credit. Information is available here.

The films that make up the festival encompass documentary, drama, and comedy. They are:

The 2010 Asian Film Festival is presented by Notre Dame’s Kellogg Institute for International Studies and the DeBartolo Performing Arts Center, with the support of more than a dozen departments, offices, and organizations at Notre Dame.

Originally published by newsinfo.nd.edu on March 15, 2010.