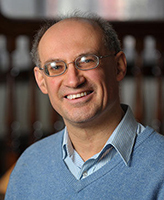 Vittorio Hösle, Paul Kimball Professor of Arts and Letters at the University of Notre Dame, has been appointed by Pope Francis to the Pontifical Academy of Social Sciences.

“We were very gratified to learn of Professor Hösle’s appointment to this truly distinguished body,” said Rev. John I. Jenkins, C.S.C., Notre Dame’s president. “On behalf of the University, I congratulate Professor Hösle for this well-deserved and important recognition, and thank him for helping Notre Dame fulfill its mission of serving the Church through scholarship.”

The Pontifical Academy of Social Sciences was established by John Paul II to promote the study of the social sciences to aid the Church in the development of social doctrine. There are between 20 and 40 Pontifical Academicians worldwide from the fields of economics, sociology, law, and political science.

“On the one hand, it is a great honor that members of the academy and his holiness respect what I’ve done academically,” Hösle says. “But for me it also means a great chance to learn more from my distinguished colleagues in the academy and from how the church formulates social doctrine.

“So it is both a recognition and an incentive to do my best and try to contribute and bring in my own expertise—which is philosophical rationality—into the debates in the academy.”

The Academy organizes an annual conference and workshops on specific themes, promotes scientific research, and publishes its deliberations and scientific papers. Upcoming events include a workshop on human trafficking and on environmental sustainability.

In the College of Arts and Letters, Hösle is a professor in the Department of German and Russian Languages and Literatures and has concurrent appointments in the Departments of Philosophy and Political Science. He was founding director of Notre Dame’s Institute for Advanced Study from 2008-2013.

Hösle, who joined the University of Notre Dame in 1999, has received numerous prizes and awards, including the Fritz-Winter Prize of the Bavarian Academy of Sciences. He has had visiting professorships in many countries and a number of distinguished fellowships, including at the Institute for Advanced Study in Princeton, N.J.

Hösle speaks seven languages fluently and is familiar with several more. “I think the question of moving between one language and another is a very important one in a globalized environment.

“It helps to understand a culture, if you can address it, read it, understand it in its own terms.” 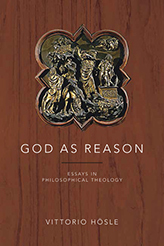 Hösle has written or edited more than 30 books, which have been translated into 20 languages. His most recent publications include The Many Faces of Beauty, God as Reason: Essays in Philosophical Theology, and The Philosophical Dialogue: a Poetics and a Hermeneutics.

His next book, he says, will also focus on hermeneutics. “What are the criteria of valid and invalid interpretation?” he asks. “What allows us to say an interpretation of a text is correct?”

Looking ahead to his work with the Pontifical Academy, Hösle says that although he considers himself a “philosopher by training” and not a theologian, he sees “a certain convergence between what sound reason dictates and the teachings of Christian theology.

“In that sense, I have sympathy for the theological tradition,” he says, “and I think that in the long run, theology and philosophy will converge.”