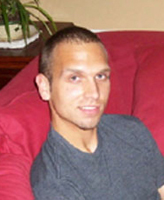 Alexander Skiles, a doctoral candidate in the Department of Philosophy, spent the last year delving into the study of metaphysics with the help of a Kaneb Pre-Doctoral Fellowship, which helped fund his recent research at Australian National University (ANU).

The fellowship program is sponsored by Notre Dame’s College of Arts and Letters, the Graduate School, and the Kaneb Center for Teaching and Learning. A Graduate Student Research Award from the College’s Institute for Scholarship in the Liberal Arts also provided support for Skiles’ research.

While in Australia, Skiles worked with Jonathan Schaffer, then a professor at ANU and now a professor at Rutgers University, on topics related to the metaphysics of fundamentality—the core of Skiles’ dissertation.

“This idea has been around since at least Aristotle, and only recently has it been looked at with modern philosophical techniques,” Skiles says, adding that “a lot of people whose research I enjoy reading were talking about this issue—but [I could not find anything] systematic that pulls together what people are saying about this topic.”

Skiles says working with scholars on the other side of the world has helped expand his horizons and pushed his research to the next level.

“That one different person you talk to can really direct how you’re thinking about issues. On one hand, that can be maddening because you think you have an idea taken care of and then you get pushed in another direction,” he says, “but it’s always fulfilling once you’ve explored a new direction.”

Even though he has not yet completed his Ph.D., Skiles, who is advised by Professor Michael Rea in Notre Dame’s Department of Philosophy, has already had measurable success. A section from his dissertation has been accepted for publication in the Australasian Journal of Philosophy, one of the top journals in his field. Funded by a grant from the National Science Foundation, he is coauthoring a forthcoming publication on the philosophy of science with Notre Dame Associate Professor of Philosophy Kathleen Brading. He is also an editor of an online directory of philosophy articles, PhilPapers.

Skiles attributes these accomplishments to the fact that he is studying what he loves, which always motivates him to dig deeper.

“For me, it’s intrinsically interesting, and I think that’s important for any line of research you’re pursuing.”