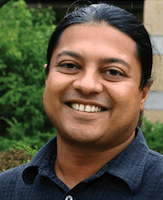 Even the most carefully planned humanitarian and development efforts are often stymied by the chaotic realities on the ground in war-torn zones such as Sudan and Northern Kenya.

Economic anthropologist Rahul Oka aims to improve the success rate of these critical relief missions by studying how local trade networks are able to operate in the same areas with remarkable resilience and efficiency.

“How do traders manage to get their items across different militia and warlord territories when non-governmental organizations (NGOs) can’t—or can only do it expensively and inefficiently through armed trucking convoys or by air-dropping food and other relief supplies?” asks Oka, an assistant professor in Notre Dame’s Department of Anthropology. “Donated relief food becomes very expensive by the time it reaches the refugees.”

“When you speak to the people on the ground, even those working in the NGOs, they know that the traders are far more efficient than the NGOs,” Oka says. “The food is brought in from the E.U. or the U.S., but the local traders distribute it. And even though the longevity of each trader or agent within a network might not be very long, the network itself is stable and resilient. One trader leaves, another comes in his or her place. They know each other through the network. It enables trade to continue in these war zones where they can’t depend upon institutions and contracts.”

Supported by the Institute for Scholarship in Liberal Arts, the Seng Foundation, and the Kellogg Institute for International Studies—where Oka is a fellow—the research project is in its initial stage.

He will return to Africa this summer to conduct extensive interviews and observations in 12 Turkana pastoral communities in Northern Kenya and near the Kenya–Sudan border to examine the long-term feasibility and effectiveness of relief intervention projects. Specifically, he will be looking at how changes in the sizes of the Turkana herds and their lack of access to markets affects conflicts and raids between communities.

“There is very little on-the-spot analysis of what could go wrong,” he says. “How do we know if conflict is caused by low herd size or lack of access to markets? What happens if we start bringing in food without this information? What happens to market prices if a lot of relief food suddenly enters the market? How do we make sure that people are not selling the food but actually eating it and building up the livestock?”

Oka also raises concerns about the people who suffer if such relief efforts fail to reduce conflict or make a positive impact on their lives.

“There are always unintended consequences to any intervention,” he says. “My goal is make sure that any development project in which I am involved is informed by on-the-ground analysis and is based on observed reality of local events and behaviors.”

Long-term studies of how all this unfolds are rare. “Ideas that seem rational and very plausible sitting in my office here in Notre Dame or at an NGO meeting in D.C.,” Oka says, “can and do start unraveling at the local level, sometimes for the good but usually for the worse. And it is always those we want to help, who will bear the burden of our failure.”