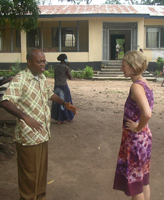 An army officer betrayed by the government and put on trial for a treasonous crime he didn’t commit. A market trader who forges an alliance with a rebel leader in order to feed her starving children. And a man who almost gets himself killed several times in order to get food for his pregnant wife.

These are among the scores of survivors Notre Dame anthropologist Catherine Bolten came to know during more than seven years researching post–war Sierra Leone. In a new book, she will use some of their personal stories to reframe the war and, she hopes, debunk what she says are some observers’ overly simplistic views of the West African nation.

I Did it to Save My Life: Morality and Survival in Sierra Leone is expected to be published by the end of this year as part of the University of California Press Series in Public Anthropology. In the book, Bolten explores the role of love and caring in the war and examines the difficult—some would say immoral—choices that people in Sierra Leone were forced to make in order to stay alive.

“These people all survived the war, and their relationships were critical to their survival,” she says. “It lends an air of logic as to why the war played out the way it did.”

Bolten joined the Notre Dame faculty in 2009 as an assistant professor in the Department of Anthropology and the Kroc Institute for International Peace Studies. She is also a fellow at the University’s Kellogg Institute for International Studies. But she first came to know the subjects of her book while working on her dissertation, which is an exploration of how people have adopted a more flexible interpretation of moral obligation as an adaptation to post–war poverty.

After an initial trip in 2003, she returned to Sierra Leone in 2004 for 15 months—a stay that was cut short by a stubborn case of typhoid. During subsequent trips in 2006 and 2010, she revisited the people she had met on those initial visits.

“I had these amazing stories of perseverance and survival, but there was no real place for them in the dissertation,” she says. “I knew I needed to write a different book in order to bring this out and bring it to light.”

Bolten’s book is also a direct counter to the media’s portrayal of Sierra Leone as a country on the verge of anarchy and chaos—overrun by political corruption, inhumane machete amputations, and gangs of drugged–out rebels.

“It was infuriating just how overly simplistic that argument was,” she says. “It basically dehumanized the people of Sierra Leone.”

To present a more complete, complex picture of the reality of life there, Bolten is already at work on her next project, which looks at education, youth, and inter–generational tension—some of the unanswered questions she left Sierra Leone pondering when she finished her dissertation in 2006. This fall, she plans to apply for grants to return to Sierra Leone following the country’s 2012 elections.