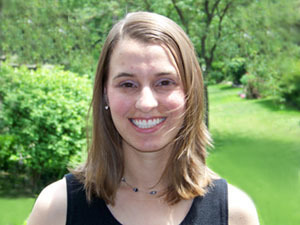 When Kate Gardner wanted to study how France and Great Britain have incorporated their Muslim immigrant communities, Notre Dame gave the graduate student a chance to take an up-close look.

Money from two University institutes paid to send Gardner, now a doctoral candidate in the Department of Political Science, to both countries as she explored the topic.

Her learning helped her obtain an exclusive fellowship to fund her dissertation research, which will compare Muslim incorporation policies in the United States with those in France and Great Britain.

Gardner received a 2008-09 Fellowship in American Politics, Foreign Policy and World Politics from the University of Virginia’s Miller Center of Public Affairs and is paired with mentor John Esposito, a leading Islamic Studies scholar. She is among just nine scholars selected for such a fellowship from a pool of 180 applicants nationwide.

“It was very important for getting the fellowship that I was able to do preliminary research and data-gathering on my trips to Europe,” she says. “I have had a very positive experience at Notre Dame.”

The trips allowed Gardner to perform archival research. They also provided her with valuable “on-the-ground experience,” she says, giving her opportunities to interview government and religious officials, as well as representatives of Muslim organizations.

“Interacting directly with the people who shape policies enabled me to refine my research early on in the project,” she says.

These experiences supplemented her classroom learning, laying the foundation for her doctoral project, which aims to explore new territory by analyzing U.S. policies in a comparative context

In the United States, Gardner says, the 9/11 terrorist attacks prompted a new focus on Muslim communities. That contrasts with the situations in France and Great Britain, which for years have been have been exploring incorporation issues—everything from imam training to food provision and ritual animal slaughter.

Gardner argues that 9/11 heightened American policymakers’ awareness of government’s relationship to religion. Increasingly, she says, the U.S. government is looking at such issues as how it treats different religious groups, and what sort of policy it should have toward “faith-based initiatives,” or religious charities that deliver goods and services.

Gardner sees some similarities between the United States and Great Britain—both countries increasingly welcome the idea of using faith for government purposes, and both take a multicultural approach to immigrants, including those in the Muslim community.

France, by comparison, does not embrace a faith-based agenda, but instead tries to separate religion from the public sphere. In addition, Gardner says, it takes an assimilationist approach toward Muslim immigrants.   “You’re looking very broadly,” she says, “at these issues of assimilation and multiculturalism.”