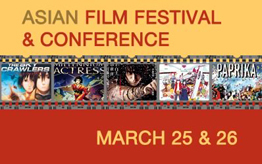 Ninjas, mysterious dream worlds, and evil social-networking sites are among the themes that will play out on the big screen this weekend during the University of Notre Dame’s seventh annual Asian Film Festival and Conference.

“Our goal with the Asian Film Festival every year is to raise awareness of and appreciation for Asian culture on campus,” says Deborah Shamoon, assistant professor in the Department of East Asian Languages and Cultures and faculty chair of this year’s event.

Presented by the Kellogg Institute for International Studies and the DeBartolo Performing Arts Center March 25-26, the festival will showcase five recent animated films from Japan, including two from internationally acclaimed director Satoshi Kon.

“While Japanese animation has recently become quite popular in the United States, the programming that makes it onto TV here is still limited and does not represent the full spectrum of animation in Japan,” Shamoon says. “We wanted to showcase some recent films that aim for a more sophisticated audience and that tackle serious, complex themes.”

Each year, the festival focuses on a specific concept, region, or genre in Asian film. Past themes include independent films from China, exploring cultural identities, and humanism and political divides. “It’s up to the students and faculty where this goes,” says Sharon Schierling, the Kellogg Institute’s associate director.

Christie Ahn, a political science major and member of this year’s festival organizing committee, says she found the experience quite rewarding. “I am not particularly familiar with Asian film, especially animated film,” she says, “but preparation for this conference has allowed me to really understand and appreciate the cultural significance and history that is beneath the surface—the message behind the festival’s chosen films and the culture that saturates them.”

The festival has evolved since its inception six years ago, Schierling says, growing a larger audience and adding an academic conference and accompanying one-credit special studies course.

“We are very lucky to have three of the leading scholars of manga (comics) and anime (animation) as guest speakers this year,” says Shamoon. “All three of their talks will put the films in Japanese cultural context and will discuss current trends and new directions for animation in Japan.”

The date and the theme for the festival were chosen long before the devastating earthquake and tsunami hit Japan, and organizers are now looking at ways to incorporate fundraising for disaster relief into this weekend’s event.

“We will be at the conference on Saturday folding cranes, teaching people how to make them,” says Natalie Fang, president of the University’s Japan Club. “For each crane folded, we hope to raise one dollar in donation.”

The festival also provides a timely educational opportunity, Schierling says. “Because of the earthquake, people have been more focused on Japan,” she says. “Here’s a country most people don’t know very much about, but now that their care and concern has been piqued, they might be open to learn more about the culture.”

Between the exclusive screenings, the distinguished speakers, and the opportunity to help the people of Japan, this year’s event has a lot to offer, says student coordinator Paige Norris. “I think it would be great if the Notre Dame community came out to experience the festival,” she adds. “People will definitely be interested in what Japanese animation has to say.”

This year’s Asian Film Festival and Conference received support from Japan Foundation, New York; as well as the university’s Center for Asian Studies; Department of East Asian Languages and Cultures; Department of Film, Television, and Theatre; Institute for the Scholarship in the Liberal Arts; Kaneb Center; Office of International Student Services and Activities; and the Japan Club.