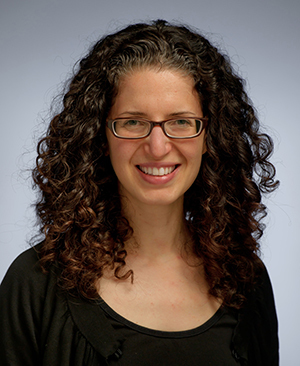 Yasmin Solomonescu, an assistant professor in Notre Dame’s Department of English, was recently awarded a residential fellowship at the National Humanities Center (NHC).

The NHC is a leading independent institute for advanced study dedicated to the humanities. The North Carolina-based center selects 40 fellows annually from a pool of more than 500 applicants from around the world.

During her yearlong fellowship, Solomonescu will work on Romantic Persuasions, a book project that investigates theories and practices of persuasion in British novels, poetry, and plays from roughly 1770-1840.

“Solomonescu’s fellowship recognizes the great significance and compelling design of her project on the art of persuasion in the Romantic era texts and their persuasive role in revolutionary times,” said Stephen Fallon, department chair and John J. Cavanaugh Professor in the Humanities.

A longstanding critical tradition argues that rhetoric and literature, so intimately intertwined in the early modern period, parted company for good in the Romantic era, Solomonescu said.

“My book aims instead to show how a wide array of theories and practices of persuasion, classical and modern, were adapted into a literary rhetoric concerned with cultivating certain states of consciousness in the reader,” she said.

“I am particularly interested in how the art of persuasion converged with the science of the mind as writers grappled creatively with the aesthetic and emotional, as well as logical and rational, dimensions of knowledge and belief.”

Solomonescu’s study is driven by three interrelated questions, she said. First and most broadly, how were rhetorical concerns and strategies taken up by poetry, fiction, and drama, and to what effects? Second, what types of response did Romantic literature imagine for itself and invite by staging scenes of persuasion that sometimes succeed, but more often fail? And third, how was persuasion in and by Romantic texts informed by the emergent science of the mind?

“In taking up these questions, I hope to shed new light on individual works as well as on broader cultural anxieties about the democratization of literature, the persuadability of reading audiences, and the roles of reason, feeling, and the imagination in shaping human opinion and action,” she said. “These anxieties continue to inform contemporary attitudes to the intersections of literature and rhetoric.”

Solomonescu specializes in British Romanticism with particular interests in literature’s intersections with political culture, the sciences of life and the mind, and rhetorical theory and practice.

In 2014 she published her first book, John Thelwall and the Materialist Imagination, which reassesses Thelwall’s diverse body of work—literary, political, and elocutionary—from the vantage of his materialist arguments about living nature, from vitality and cognition to agency and reform.

A founding member of the John Thelwall Society, she co-organized the society’s inaugural conference at the University of Notre Dame London Global Gateway in July 2014.

The conference marked the 250th anniversary of the birth of the democratic reformer and polymath and celebrated Notre Dame’s acquisition of eight rediscovered letters from Thelwall to fellow reformer Thomas Hardy.

Solomonescu is spending the 2014-15 academic year at the NHC. There, she plans to research and write at least two of the core chapters of Romantic Persuasions, chapters centered on Percy and Mary Shelley.

In addition, Solomonescu will have the opportunity to engage intellectually with the other 39 NHC fellows, who represent humanistic scholarship in anthropology, art history, classics and archaeology, communications studies, history, law, literature, political science, philosophy, and religion.

“I am excited about the new perspectives the experience will bring to my current and future projects, and I look forward to integrating those insights into my teaching at Notre Dame on my return,” she said.