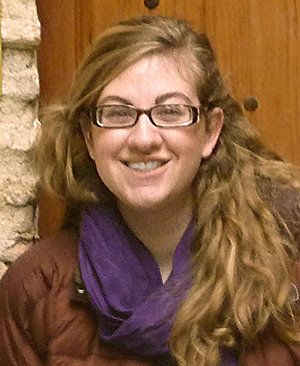 “Everyone has a story, and some people aren’t given the opportunity to share theirs—whether it’s because they don’t have the language ability or because social circumstances don’t give them a chance,” said Liz Young ’11, a graduate of Notre Dame’s College of Arts and Letters.

Young came to the University in 2007 knowing she wanted to major in Spanish, but also wanting to explore and better understand human behavior.

“I was really just passionate about people—learning what drives us, what makes us who we are, and how we form communities and relationships,” said Young, who also majored in anthropology.

Through community-based learning coursework in the Department of Romance Languages and Literatures, Young found a way to combine both of her interests, and ultimately, found her calling in a career in service.

The private school is part of a nationwide network and has more than 500 students from low-income, Mexican-American immigrant families.

“Cristo Rey is an example of an alternative intervention method,” Young said. “It isn’t going out into the streets and stopping fights or taking guns from people, but it is bringing people at risk into a safe place, and providing education that will be their way out.”

While visiting, Young learned that Cristo Rey offered a two-year volunteer program for recent college graduates, and she decided to apply.

“I hadn’t been looking for a job in education,” she said. “But I was looking for a way to keep working with the Spanish-speaking population and this was my opportunity.”

Young loved the work so much that she accepted a part-time position with the school after the program ended. She is also working toward a Master’s degree in social justice and community development from Loyola University in Chicago.

“You really can make a career out of service,” Young said. “And I am so grateful for that.”

At Cristo Rey, Young uses her Spanish language skills on a daily basis, often to communicate with parents about their child’s grades or other activities and resources at the school. She has also been called on to interview prospective students in Spanish. The school has a dual-language curriculum, requiring students to be fluent in both Spanish and English.

Young also coordinates the school’s community service and social justice initiatives. Because every student must complete 20 hours of volunteer service each year, she helps connect students with community organizations.

“The population at Cristo Rey is seen as a population in need of help, and what I love most about my job is teaching students that they have valuable assets to bring to the community as well,” Young said. “I think that stems from what I learned in service-learning courses at Notre Dame.”

She recalled one course in particular that proved especially valuable in the work she now does. Taught by Marisel Moreno, an associate professor in the Department of Romance Languages and Literatures, the course focused on people of Latino descent and their experience living in the United States.

The students examined the issue through literature and discussion in the classroom, as well as through volunteer work at La Casa de Amistad, a community center for Latinos in South Bend.

Young and two other students wrote a research paper based on their experiences and presented it at Notre Dame’s Conference on Mexico that year. The paper, which focused on the disconnect in identity and experiences between first- and second-generation Mexican immigrants, was later published in the Journal of Undergraduate Research on Mexico.

That deep look at generational issues has helped shape Young’s perspective when working with the parents and students at Cristo Rey. Building relationships with these families has been one of the most fulfilling parts of the job, she said.

“I love getting to know these kids and be a part of their story. I see my students, my education, my faith, and my passion for service come together in something that equals social justice.”