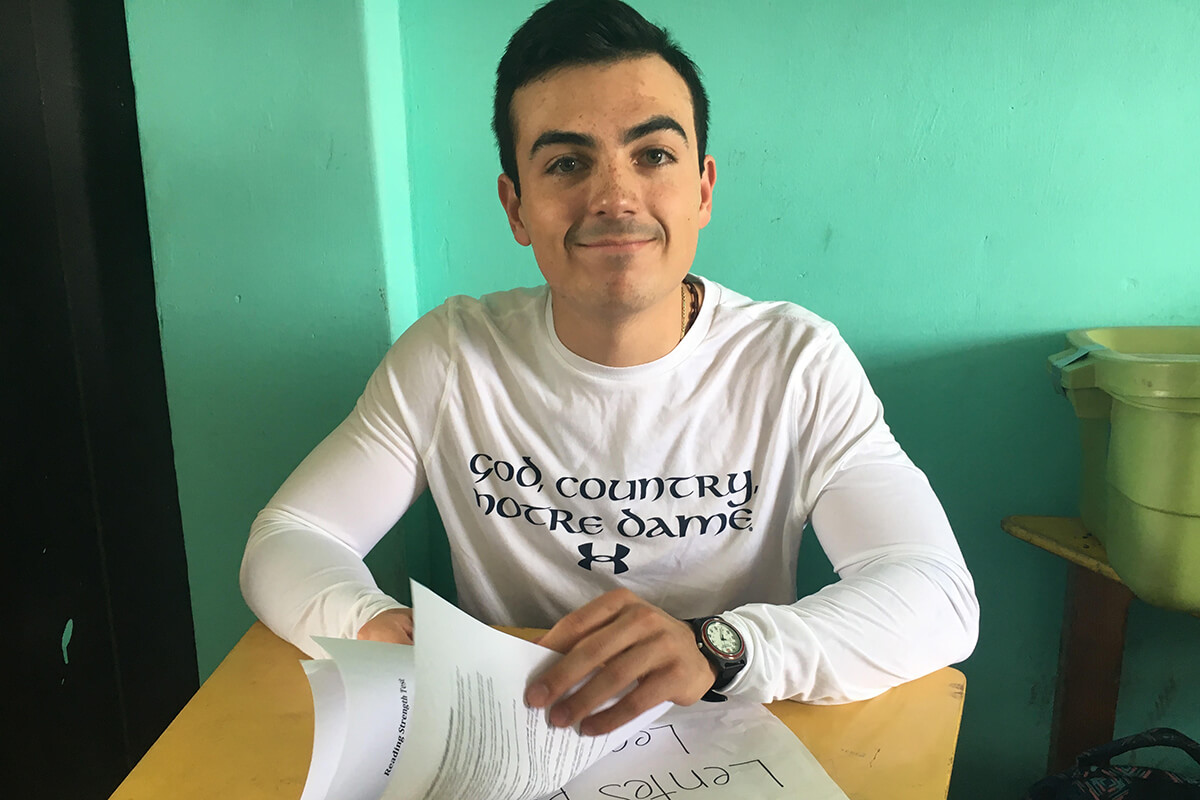 That’s one of the many reasons the junior finds value in majoring in theology and Arts and Letters pre-health.

“I always see connections between the liberal arts and the sciences, a lot more than what people might realize,” he said. “That's something that I like about it. Arts and Letters subjects are very versatile and flexible.”

While Feijoo has always had his eye on medical school and hopes to become a doctor, he wasn’t always planning to major in theology. Initially, he was majoring in English, but one day, he noticed he was rarely thinking about literature, but he did talk a lot about God.

“I ended up spending an hour at office hours after my theology classes, talking to my professors about a whole bunch of questions I had,” said Feijoo, a Balfour-Hesburgh scholar. “So in a sense, my subconscious was telling me more about myself that I didn’t realize at the time.

“My theology major is a lot about morality and taking care of those that can’t really take care of themselves. Having a sense of responsibility when you have the power to do something that others can’t.”

That sense carried Feijoo to Ecuador during the fall of his sophomore year, working with Timmy Global Health, a nonprofit organization that provides sustainable medical care to South American countries.

Feijoo worked as a scribe for the doctors, utilizing an electronic medical record system to track patient progress. He enjoyed the experience so much, he returned to Ecuador again over fall break, serving as a trip leader.

The first patient Feijoo saw was a very fragile Ecuadorian woman that reminded him of his great-grandmother. After guiding her to the doctor’s makeshift room in the dilapidated community center, Feijoo told her not to worry, and that he was there to help her.

“The look that she gave back to me — it was overwhelming. That’s why I want to become a doctor, but also what I read and learn about God while studying theology. That's how it's connected, specifically with my majors — just the compassion and the charity involved with both areas."

“The look that she gave back to me — it was overwhelming,” Feijoo said. “I don’t know how to describe it, but it was a sense of trust. And I really loved that part of it. That’s why I want to become a doctor, but also what I read and learn about God while studying theology. That's how it's connected, specifically with my majors — just the compassion and the charity involved with both areas." 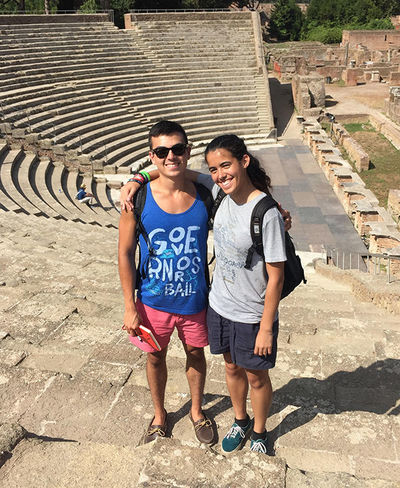 Feijoo in Rome the summer before his first year at Notre Dame.

Ecuador has always been a special place to Feijoo — his mother was born there, and he had visited it previously. Being able to travel back to the country with a mission to serve the sick and poor strengthened his bond with her homeland.

“Morally and spiritually, I felt obligated to help,” Feijoo said. “And I was more than happy to do so. On a religious level, I found sacredness in what I was doing in helping a lot of these people.”

International experiences have been a significant component of Feijoo’s time at Notre Dame — even before he arrived on campus.

As a senior in high school, he saw an advertisement for a three-week literature seminar at Notre Dame’s Rome Global Gateway through the Office of Pre-College Programs.

“The great thing about Arts and Letters is that it has amazing abroad opportunities,” Feijoo said. “Before Welcome Weekend, before any classes even started, I was able to go to Rome for three weeks. It was absolutely phenomenal.”

His sophomore year, he took the Life and Times of Henry VIII College Seminar course, which included a fully funded trip to London over spring break.

“We got to apply what we learned in the classroom to real-life sites, castles, and exhibits,” Feijoo said. “It was just very unique compared to the other seminars. That’s something that I love about the College.” 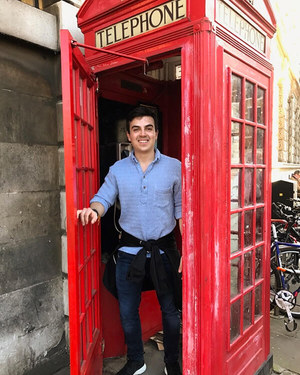 Feijoo went to London over spring break of his sophomore year with his College Seminar course.

Outside of the classroom, Feijoo finds a meaningful connection between his passion for fitness and exercise through Bengal Bouts, Notre Dame’s annual charity boxing event.

As a captain this season, Feijoo is dedicated to more than just preparing for the ring. His main priority is raising money for the Holy Cross Missions in Bangladesh, which provide schools, churches and health care facilities in the South Asian nation.

“People can use a talent, such as physical fitness, and apply it to something greater,” Feijoo said. “People think a lot that it is just about boxing, but the main priority is the fundraising that we do.”

This concern for charity is an accurate reflection of Feijoo’s future career goals, which perfectly align with the University’s mission, too.

“Yes, it’s amazing work that we do now as students,” Feijoo said, “but I’m really looking forward to when I become a doctor, and I’m capable of doing more to help others. That’s my long-term goal — ingraining charitable work with my profession.”