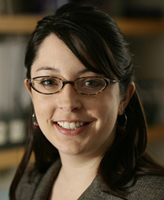 According to a new study by University of Notre Dame economist Kasey Buckles and graduate student Elizabeth Munnich, siblings spaced more than two years apart have higher reading and math scores than children born closer together. The positive academic effects of greater spacing between children were seen in older siblings, but not in younger ones, according to Buckles.

The study will be published in an upcoming issue of the Journal of Human Resources.

Using the 1979 National Longitudinal Survey of Youth (NLSY79), researchers sampled a nationally representative panel survey of 12,686 young people ages 14 to 22 in 1979, and their children. The study was designed to identify the causal effect of spacing on academic achievement.

“Our results indicate that longer gaps improve test scores for older children, and have no effect on the scores of younger children,” Buckles says. “This appears to be due in part to the fact that older children get more of their parents’ time when the younger sibling is not born until a few years later.”

Earlier research in other fields has focused mostly on the effects of small gaps (less than two years) between siblings on early outcomes such as birth weight and infant mortality. Buckles’ study investigates the effects of birth spacing on later-life academic performance as measured by the Peabody Individual Achievement Tests for math and reading.

“Parents often wonder whether there is an ideal spacing between children. Our results suggest that for at least one important outcome—academic achievement—greater spacing can improve outcomes for the older sibling.”