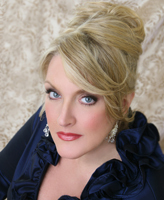 “It’s all I’ve ever dreamed about,” says Deborah Mayer. “I can’t think of any young, American, soprano who didn’t dream of singing at the Met. Now I can die happy.”

Mayer, a vocal instructor for the Department of Music in Notre Dame’s College of Arts and Letters, will make her debut with the Metropolitan Opera this spring in the role of Gerhilde in Richard Wagner’s opera, Die Walküre; part of the Met’s revival of Wagner’s epic, four-part Ring cycle directed by Robert Lepage, and conducted by Met Principal Conductor Fabio Luisi.

The Ring cycle has a special place in Mayer’s heart, she says.

“As a young singer I made the choice to move to Bayreuth, Germany specifically to study the Wagnerian style with excellent teachers there, and after that, I lived and worked in the German theaters for a few years as well—so you could say I’ve really been preparing my whole life to sing Wagner roles.”

A Wild Ride to the Met

Because of this, Mayer says, she was ready when the whirlwind audition process began with a call from her manager. “They asked if I could learn the part and be in New York in a week, and I realized that if I didn’t go I might miss my chance.”

She flew to New York over the weekend, auditioned on Monday, flew back to Indiana that same evening, and was teaching voice lessons again on Tuesday morning.

“By Wednesday my manager had an offer, but I had to keep quiet until I had a contract; it was killing me not to tell anyone,” she says.

The Met’s highly anticipated and successful production of the Ring cycle was televised on PBS last fall. This spring, Mayer will join the cast in a revival to celebrate the 200th anniversary of Richard Wagner’s birth. The stage director, a veteran of the cutting-edge dance and circus act Cirque Du Soleil, has created an innovative stage set.

“There’s been a lot of talk about this production,” Mayer says. “It has a huge wooden hydraulic set that moves. It’s a rolling set, there are projections—it’s very computerized and modern.”

This poses new challenges for Mayer as she prepares for her role, she says. “I’m trying to stay physically fit because with the way the set is I need to be agile and very athletic. I’ll be carrying a spear and wearing a helmet and breastplates,” she says. “I go to the gym every day now.”

Aside from the physical preparation, Mayer continues to perfect her singing role with an assistant conductor at the Lyric Opera of Chicago, Eric Weimer, who is also a Wagnerian expert, having prepared no less than twelve complete Ring cycles. In the spring, she will have two weeks of rehearsals with the cast in New York.

In the meantime, though, Mayer continues to teach singers right here on campus. “Everyone has a different subject that they’re studying, so I find the students of Notre Dame to be really interesting,” Mayer says. “I teach country music, classical, jazz. I work on all kinds of music, musical theater, everything. That’s been really wonderful.”

She also particularly enjoys the diversity of the students—she teaches everyone from voice majors and minors to other students just hoping to fit in a few voice lessons—and the fact that Notre Dame students work so hard.

“I’m always so impressed with how prepared my students are,” she says. “I really appreciate the respect they give me coming to their lessons.”

Some of Mayer’s students are even planning to attend her Met debut, along with faculty members, friends, and family. “The music department and my colleagues are amazing,” she says. “They’ve always been so supportive because I’m often gone; I have a very close knit faculty which is very family-like.”

Life on the Road

While this will be Mayer’s first performance at the Met, she has spent years singing across the United States, Asia, and Europe. Life on the road can be grueling, says Mayer, but the payoff is well worth it.

“I’m always travelling; I meet a really interesting group of people. It’s exciting to meet a new cast, to collaborate with other musicians. That makes me more inspired.”

What Mayer is looking forward to most now, though, is the moment in April when the orchestra strikes the opening notes for “The Ride of the Walküres” in the third Act of Die Walküre.

“I’ve sung Brünnhilde’s Immolation Scene from Götterdämmerung in concert before,” she says, “and when I heard the orchestra I just started to weep. I’m sure it will be the same feeling at the Met. I’m sure it’s going to be incredibly loud, I’ll feel it all the way inside my chest.”

In that moment Mayer truly will be living every young soprano’s dream.