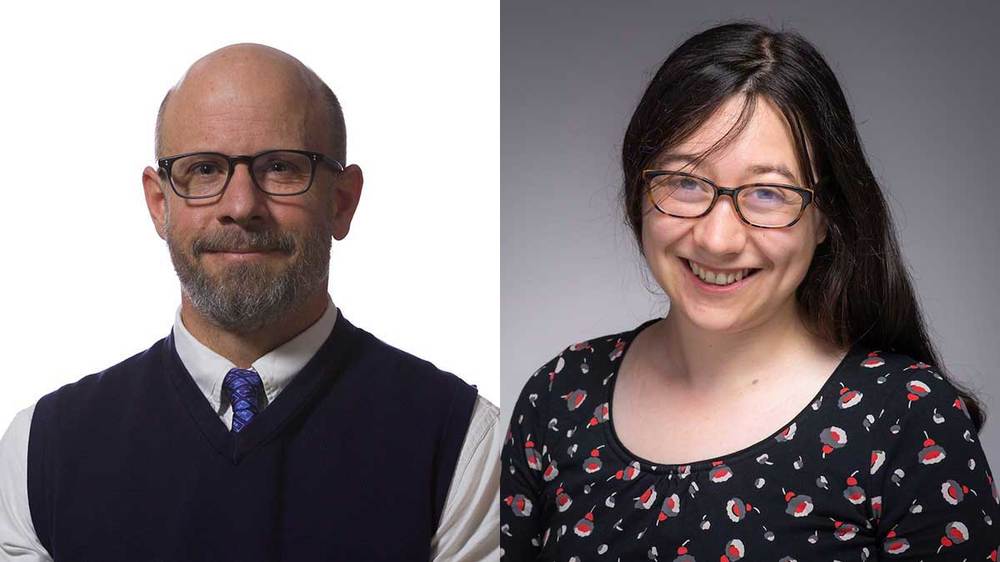 Notre Dame researchers Jon Coleman, professor of history, and Emily Wang, assistant professor of Russian, have been named fellows in the 2020 cohort of American Council of Learned Societies (ACLS).

ACLS fellowships honor scholarship in the humanities and humanistic social sciences, and Coleman and Wang were among 81 winners selected from nearly 1,200 applicants.

“The success of our faculty in winning ACLS fellowships, among other nationally competitive research awards, is a testament to the prestige of their work and the support they receive from our Institute for Scholarship in the Liberal Arts,” said Sarah Mustillo, the I.A. O’Shaughnessy Dean of the College of Arts and Letters.

Coleman, chair of Notre Dame’s Department of History and an expert in American environmental history, will use his yearlong fellowship from ACLS to advance his research on the Kankakee River in Illinois and northern Indiana. This will include traveling to archives and writing a history of the river in reverse chronology.

“The Kankakee River was once a sluggish, magnificent engine of biodiversity, but in the early 20th century, the river’s marshlands were dredged and destroyed,” Colman writes in his project’s abstract. “The soggy splendor of 500,000 wetland acres was no match for reclamation, and according to reclamation’s logic, the Kankakee destroyed resources rather than sustained them. By taming the river, farmland would be freed from the floods and mud would become real estate.”

Coleman refers to this line of thinking as the “gospel of unmaking” and argues that the best way to counter this unholy conceptual narrative is to push back on the current of time.

He said the biggest challenge — and most distinctive feature — of this research is its reverse chronology, but that approaching the project this way will enable readers to imagine what the marshlands were like before history overwhelmed them. Coleman’s inspiration for this approach came from a scene in Kurt Vonnegut’s novel Slaughterhouse-Five, where a time-traveling character who survived the Dresden firebombing watches a World War II film about American bombers. Since the character is drifting in time, the film runs backwards for him.

“Environmental historians usually explain how ecosystems are disturbed or destroyed by economic development,” Coleman said. “Viewed backwards, resources travel back to their points of origin, and this rewind conjures value. We may not be able to put history back into the tube, but we can use literary imagination to see value in environments that have yet to be squeezed.”

Wang’s research focuses on Russian poetry of the 18th and 19th centuries, in particular the role poetry played in helping Russians understand the world (and themselves) intellectually and emotionally. Her ACLS fellowship will support her project showing how literature shaped the Decembrists, a group of liberal young Russian conspirators who staged a revolt against Tsar Nicholas I in 1825.

Wang introduces the concept of ‘civic sentimentalism,’ or the conviction that cultivating civic sentiments also produces civic virtue, which developed from literary models of emotion. She also unpacks how the Decembrists understood Lord Byron and Alexander Pushkin according to its terms — often to the dismay of Pushkin himself.

“While the Decembrists’ attempt to give Russia a constitutional government ultimately failed, their potent emotional ideal helped Pushkin develop his later conservative politics and his most mature works,” Wang writes in her abstract. “Also, civic sentimentalism found a surprising successor in Leo Tolstoy.”

While the Decembrists were studied extensively in the Soviet Union, Wang pointed out that scholars were limited by the party line on the topic, and one’s career could be destroyed for pointing out that Pushkin — a friend of many Decembrists and an outspoken liberal in his youth — ended up a fairly conservative thinker with aristocratic leanings.

She said that while the Decembrists were considered heroic in the Soviet era, their reputation has changed over time. One 2019 film depicted them as foolish children, which many regarded as a comment on recent opposition political activity.

“Just like in the Soviet Union, official portrayals of this period tell us more about the political vision of those in power than about the past,” Wang said.

Wang noted that the ACLS fellowship would allow her not only to finish her book, but also to add a section on Tolstoy for a wider audience.

“It’s a huge honor to be selected, and I am grateful for Notre Dame’s support for humanities scholars at the beginning of their careers when so much depends on research leave opportunities,” she said.