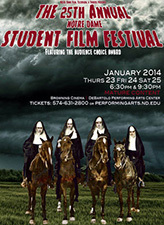 The University of Notre Dame’s Department of Film, Television, and Theatre (FTT) announces the 25th Annual Notre Dame Student Film Festival, in the Browning Cinema, January 23 through 25, 2014. As in 2013, audience members will be invited to vote for their favorite film via text message. The Audience Choice Award will be presented to the student director(s) of the winning film before the final screening.

Celebrating its 25th year, the Notre Dame Student Film Festival screens films that were made by undergraduate students during the past year as class projects in the Department of Film, Television, and Theatre.

Festival founder and FTT faculty member Ted Mandell says, “Honestly, I can remember every film from every year. Unfortunately, I can’t remember much else.”

Ash (8:17)
Ray Herrly, Pat Nguyen
A loner finds himself in the middle of nowhere.

Gimp (10:17)
Camille Muth, Hunter Speese
To most people, Toronto writer Aaron Broverman is a person with a disability. He would like to change that perception.

Lilith’s Game (10:57)
Anthony Patti, Johnny Whichard
Someone has been playing video games for far too long.

The Suicide Disease (16:14)
Katie Mattie, Vincent Moore, Will Neal
Frances Shavers had a wonderful life as a top administrator at the University of Notre Dame. Then, a rare nerve disorder changed everything.

Dinner For None (6:18)
Kurt Zhuang, Chris Silvestri
A summer thunderstorm crashes into an eerie dark tale.

Unexpected Fortune (8:37)
Will Neal, Nick Desmone
A slow day at the Seven-Eleven, or so she thought.

The Last Free Place (12:30)
Madeline Basil, Chris Holmes, Zach Ostapchenko
On an abandoned military base in the Colorado Desert, a resourceful community of “Slabbers” lives on the fringe of society.

A Quiet Day At The Park (3:15)
Mikey Nichols, Joey Doyle, Megan Flynn, Caroline Clark, Nick Goldsmith
In spandex, no one can hear you scream.

The Wormhole (6:25)
Colton Williamson
A distant relative of HAL 9000 sends everything down the drain.

My Neighbor Ned (11:07)
Andrew Cheng, Marty Flavin
While preparing for the inevitable zombie apocalypse, Jesse gets his wish.

Screenings will be held on Thursday, Friday, and Saturday at 6:30 p.m. and 9:30 p.m. Running time is approximately 122 minutes.