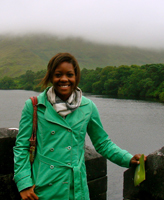 Walking through O’Shaughnessy Hall near the end of her first semester at Notre Dame, Kristina Hamilton saw a flyer advertising the University’s Irish language courses. “I had an open class for the spring,” she says, “and I figured, ‘Why not?’”

Just six months later, Hamilton found herself on the West Coast of Ireland, immersed in an intensive language program and in the culture of the Irish people.

Hamilton, an economics and finance major, travelled to Carraroe, Ireland, during summer 2010 thanks to a Summer Language Abroad (SLA) grant from the College of Arts and Letters’ Center for the Study of Languages and Cultures (CSLC).

Immersed in the New

Arriving in a new country was both exciting and terrifying for Hamilton. “The first week in Ireland was a complete overload,” she says. “Nothing seemed to be processing; it was incredibly intimidating.”

In part to lessen the effects of culture shock, the SLA program includes a mandatory course that helps prepare grant recipients to go abroad. “The course covered everything from basic immunizations to what to do when you’re having trouble understanding how to respond in certain situations or understanding cultural topics,” Hamilton says.

The training helped her adjust quickly to life in Ireland and focus on getting comfortable with the language itself, she says. And during the five-week summer program, Hamilton’s skills increased dramatically.

“I’d only taken one semester of Irish, but (Associate Teaching) Professor Tara MacLeod did a really great job preparing me,” she says.

That strong foundation—plus the intense language courses Hamilton took six days a week in Ireland—paid off. “People in the area would say, ‘You know more about our language than we do,’” she says.

While enthusiastic about Notre Dame’s Irish courses, Hamilton says her experiences outside the classroom, interacting with people in their daily lives, brought her skills to an entirely new level.

“My introductory class contained oral tests, but was less conversational than the immersion course I had in Ireland.” she says. “When you’re out in public in Ireland, you can be asked anything so you don’t know what to expect. With that, I really improved my comprehension and my pronunciation.” 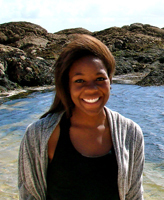 As she worked to become fluent in the language, Hamilton also received an unforgettable education in the people of Ireland. “The West Coast of Ireland has a lot of cultural richness,” she says. “They still play their instruments, and they still have that folk tradition. Everything was really old and authentic. We discovered a lot about Irish family life.”

Looking back on her own experience, Hamilton urges fellow students to take on similar challenges.

“You should be willing to do something that is different and might not necessarily fit into your coursework or your major,” she says. “I’ve been enjoying my experience thus far, and it will be interesting to take what I’ve learned and apply it in the future.”