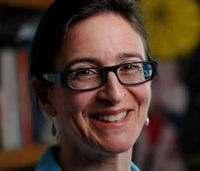 From one culture to another—and from each generation to the next—the definitions of lying and deception are understood differently. This can cause people to doubt or mistrust each other’s integrity, including in academia where the originality of ideas is especially prized and plagiarism especially abhorred.

Susan Blum, professor in Notre Dame’s Department of Anthropology, has spent years researching the complexity of these issues. One of her previous books, Lies That Bind: Chinese Truths, Other Truths, examines truth telling in China.

“A commonality in all of my work,” Blum says, “is that these things we take for granted as ‘eternal’ in fact vary.”

In her most recent book, My Word! Plagiarism and College Culture, published in 2009, she looks at variations in the way citation in academic writing is regarded historically, cross-culturally, and among faculty and students in diverse disciplines. Her research shows, for example, that some students think echoing the ideas of others in their work without citation is an act of intellectual theft. Yet others believe only direct quotes without references are problematic.

No matter their understanding of the concept of plagiarism, avoiding it can be troublesome for many students. One quoted in My Word! explains that when a multitude of people have done research on the same topic, it can be hard to decipher where a particular argument or conclusion first originated—and is even harder, then, to discuss it in an original manner.

Sometimes, words themselves get in the way. “As the literary theorist Bakhtin said, every word in language is half someone else’s,” Blum notes. “We see other people’s words imported into our own, which is part and parcel of being human. The distinction between what is mine and what is yours is artificial—we always work off others’ words.”

Adding to the difficulty students face is the fact that the rules for academic writing are often inconsistent. Some professors prefer the Modern Language Association style; others prefer the Chicago Manual of Style or the American Psychological Association or Associated Press rules. Some require footnotes, and others demand bibliographies or “works cited” pages.

“Every professor in their five classes is giving them separate instructions, and students think, ‘What is all this about?’ It’s as if someone just made up some arbitrary set of tasks, saying ‘There’s no reason for this, but I want you to take your left hand out and scratch your right ear, and then you need to scratch your left toe, too.’”

At the end of the day, Blum says, “students just throw up their hands. It seems to me that it’s not an effective way to teach.”

Blum also believes it is not constructive to characterize student plagiarism as a moral issue in most cases. The problem usually stems from students’ lack of clarity and not from purposeful deceit.

Given her research on the entire educational experience in college, she concludes that effective teaching requires increased mutual understanding between faculty and students, not just threats and punishment. “I think it’s helpful as a teacher to level with students and admit, ‘Well, this is not an eternal set of rules. We’re going to do the best we can to trace our ideas, and if you don’t do it right, I’ll try to teach you how to do it better.’ That’s my goal.”