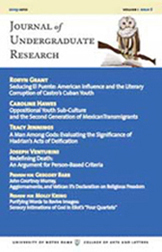 In April 2010, the College of Arts and Letters’ Journal of Undergraduate Research (JUR), Beyond Politics, Sociological Voices, and Through Gendered Lenses joined the College of Science’s journal Scientia to hold Notre Dame’s first student-organized celebration of undergraduate research and publication.

The Undergraduate Research Publication Colloquium recognized the more than 100 undergraduate authors who this year submitted work for consideration by the student editors of these research journals. The event also launched the release the 2009-10 issues of JUR and Scientia.

The colloquium was also a bittersweet occasion for the seniors who are passing the editorial torch to younger classmates. With the release of the 2009-10 JUR, for example, seniors Brennan McLoughlin and Wing Yan Wong hand over their duties as editors-in-chief to successors Andrew Spica and Hannah Jackson, both juniors.

McLoughlin, a Program of Liberal Studies major with a minor in computer applications, says he responded to a JUR editorial board flyer two years ago because the publication piqued his curiosity. “The journal is a unique sampling of the broad spectrum of intellectual traditions in arts and letters,” he says, “I got involved because I was interested in knowing more about other students’ research—and I have learned a lot from my work as an editor.”

Adds Wong, an English major, “I joined the editorial board because I wanted a tangible accomplishment in my college career. This publication represents a lot of hard work—it’s something that Brennan and I, and the entire editorial board, will always be very proud of,” she says.

Started in 2004, the JUR is the first undergraduate journal published by the College of Arts and Letters. Its mission is to provide an avenue for students to experience academic research publishing as both writers and as editors.

“The Undergraduate Research Opportunity Program, the Learning Beyond the Classroom program, and our senior thesis projects give undergraduate students impetus and support for the intensive intellectual experience of independent scholarly research,” says Stuart Greene, the College’s associate dean for undergraduate studies. “Publication of the work they produce is the next logical step in our encouraging the research experience.”

The JUR’s student editors-in-chief organize the search for editorial board members and they, along with faculty advisor Joe Stanfiel, select student editors from a pool of applications. The goal is to assemble a board that represents as many academic departments and majors as possible to cover all potential research topics. Out of 50-60 applications, 20 editors are chosen.

“The Journal of Undergraduate Research is a true student-run publication,” says Stanfiel, an assistant dean for undergraduate studies. “The editors read all of the submissions and select papers for development and publication—it’s a serious undertaking that requires students to work as professionals. This year’s editorial staff did a first-rate job.”

The 2009-10 JUR editorial board reviewed more than 50 papers representing nearly every academic department in the College to produce the 2009-10 issue which includes six research papers covering topics from the influence of American Beatniks on young counterculture poets in Castro’s Cuba to the implications of the concept of “personhood” for modern medicine’s brain-centered definition of death.