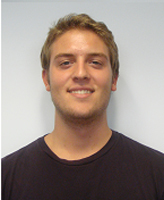 Notre Dame Junior Daniel Harper didn’t just want to study French—he sought to push himself out of his comfort zone and truly experience the country’s language and culture.

To do that, Harper, a double major in psychology and Romance languages and literatures, took advantage of a Summer Language Abroad (SLA) grant from the College of Arts and Letters’ Center for the Study of Languages and Cultures.

SLA students pursue a minimum of six weeks of rigorous coursework in their chosen country coupled with structured opportunities for local community engagement and language use.

In some study abroad experiences, says Harper, “a group of Americans move out of their on-campus bubbles only to be placed into a similar American bubble abroad.”

In contrast, Harper says, his SLA experience pushed him both to study independently and to immerse himself fully in the French culture—in part because he chose to attend l’Université de Paul-Valéry III in Montpellier.

“The student body there was very international, meaning that if we wanted to communicate, the target language was often necessary to do so,” he says.

Harper also stayed with a host “mother” for the first month. “Although it had its ups and downs, this was a huge part my abroad experience,” he says. “She was extremely instructive when it came to speaking the language and informative when it came to French culture.”

In addition to his professors and host mother, Harper says he learned a great deal through language practice with his international classmates and conversations with local people he met while exploring the city of Montpellier.

To judge by the language proficiency tests Harper took before and after his summer in France, all his efforts paid off: His skills were “low to intermediate” before the program began, he says, and “upon returning, I had improved to advanced—which I was really excited about.”

The experience in Montpellier also awakened a new love of French, he says.

“I’m kind of obsessed with it now,” Harper says, “but I also hate the idea of just eventually forgetting a language or anything that you have put so much time into studying. Ideally, I’d like to incorporate French into my future work.”

Harper says his time in Montpellier is one he will never forget, and he urges other students to consider applying for an SLA grant.

“You really can’t find many other opportunities like this.”