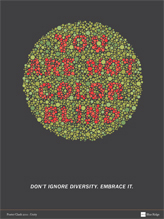 In the Department of Art, Art History, and Design, graphic design students learn to combine visual arts and technology in a way that transcends words and pictures.

“It’s 1+1=3—you bring the image and text together, and, ideally, the whole is greater than the sum of its parts,” says Robert Sedlack, an associate professor of graphic design at Notre Dame.

The results were impressive: 11 of the students were among the competition’s 64 semifinalists and three of them—Coleman Collins, Amanda Jonovski, and Jules Kim—advanced to the final round of 16. Collins, a senior film major, then went on to win second place in the competition.

Sedlack says his goal for the project was twofold. “At the basic level, poster design is different from book, brochure, website, or other design in that you have to learn how to get your message across in a concise manner—pairing visuals and typography in a cohesive unit,” he says. “It was also about digging a little more deeply into an issue. Each of them got to pick their own angle and then do a little bit of research into that subject matter.”

Originally an English major, Collins says he drew on his literary background to design his poster.

“I was coming up with ideas on little thumbnails. I’m a writer, so a lot of the solutions I come at from a copy angle,” he says. “After I stumbled upon ‘You are not colorblind,’ I tried to come up with a simple, concise copy line to go with that. The image part is almost a visual gag, if anything, and so I wanted something that would drive it home.”

The poster features an Ishihara color test that reads, “You Are Not Colorblind,” followed by the tagline “Don’t ignore diversity. Embrace it.” The message is about how people approach unity and diversity, Collins says.

“A lot of approaches are colorblind to the concept of unity—this idea that we live in a post-racial world where we should…not see difference. I found that patently wrong. Clearly, people are different—not just racially. Simple things like height, weight, gender—people are different,” he says. “It struck me as wrong that we should approach the concept of unity by removing people’s individual identity.”

While the initial poster concept remained mostly unchanged, three in-class critiques and feedback from Sedlack helped Collins to refine and polish his design. But even after finishing and submitting the project, Collins says he was unsure if it would be successful in the design competition. “From a personal standpoint, there were three or four posters that I thought were better than mine,” he says.

After three rounds of online voting, however, his poster was ranked a No. 1 seed going into the final round, which was judged by graphic design professionals from across the country.

“I think part of the reason mine did so well,” Collin says, “was because it had that contrarian concept—the message was different than most.”

As he prepares to graduate this May, Collins says he is open to many opportunities. “I stumbled on design as a thing that I could do pretty late in my college career,” he says. “I could see myself doing writing, photography, filmmaking—I have a lot of different interests. I basically want to make things for a living.

“I want to synthesize; that’s what I like doing.”