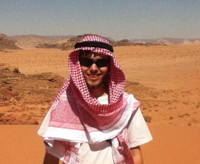 Whether they camped with Bedouins in the Jordanian desert, visited ancient temples in Japan, hiked around the Black Forest of Germany, or took a road trip to the beaches of Ecuador, the alumni of the University of Notre Dame’s Summer Language Abroad (SLA) grant program agree on one thing: their experience was completely transformative.

Elise Murray, a sophomore German and psychology major, credits her SLA experience last summer in Germany with helping her “become a better person—academically, socially, and culturally.”

“The SLA program changed my entire life—my entire direction in life,” says Alec Fogarty, a sophomore economics, business, and Spanish major who spent summer 2012 in Ecuador. “I want to work abroad. I want to live abroad. I want my life to be abroad.”

A program of the College of Arts and Letters’ Center for the Study of Languages and Cultures (CSLC), SLA offers students funding to complete an intensive curriculum in their chosen country, coupled with real-life language use and structured opportunities for community engagement.

“This rigorous program of study is unique among Notre Dame’s international programs and one of only a select few providing comprehensive and research-driven language study abroad in the nation,” says Lance R. Askildson, director of the CSLC and associate professor of practice, second language acquisition. 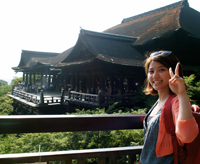 Il-Jee Kam, a junior sociology and psychology major, spent her summer in Kyoto, Japan, perfecting the intricacies of Japanese. The classes, she says, carefully combined cultural and scholarly aspects of language study.

“The teachers usually had an event or a guest speaker for us,” she says. “Every day we did different things—speaking, writing, grammar. We’d go around and take a picture of something we didn’t know then bring it back and discuss with the class.”

Fogarty, who studied in Cuenca, Ecuador, enhanced his coursework by volunteering at a local hospital in the children’s cancer unit. “I’d never seen anything like that; all the kids were hooked up to IVs for most of the day. I helped them play games, do puzzles, and draw. I wish I could have done more.”

Murray communicated through the universal language of soccer while her ear adjusted to the distinct dialect of Freiburg, Germany.

“There are a lot of destitute communities right outside the city,” she says. “There was a park where homeless people would hang out, and once a week my class went there to play soccer and get people in the community involved.”

The experience, she says, was unforgettable. “We got to interact with people who didn’t have the opportunity to have fun in their week. The soccer games allowed them to have an outlet in their life and interact with other people who normally would overlook them.” 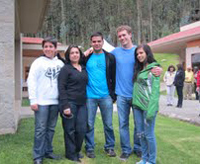 “The goal of the program is to maximize the efficacy and efficiency of language study abroad through targeted preparation, instruction, and accountability,” he says, noting that grant recipients complete special coursework before they go to prepare and once they return to debrief. They also undergo pre- and post-testing to measure how much their skills advance.

Students—and their test scores—can attest to the success of this approach.

“My comfort level shot through the roof,” says Murray. “I’ve gotten to the place where I can think in German now and have simple conversations without thinking about it.”

Owen Cox, a senior Arabic major who studied in Amman, Jordan, says colloquial classes he took were a big help as he adjusted to life in the Middle Eastern country. “We learned how to go shopping, how to get around in a taxi, how to order at a restaurant,” he says. “I became more relaxed giving directions and introducing myself. By the end of the first month I really had no fear.”

The language skills don’t just happen, though. Kam warns that it can be all too easy to slip into English, especially when talking with fellow students.

“I had to be proactive and reach out to interact with the community,” she says. “As long as I took the initial step, it was easy.”

Cox, too, admits that “there were instances where I gave up and reverted back to English. But it was disappointing, so I tried to think back on those moments and when I got another opportunity I would give an extra push.”

Home Away From Home 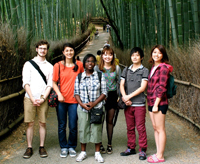 Some of the most important language learning happens outside the classroom, participants agree, and the living arrangements can play a huge part in this.

Kam lived in the house of a Japanese professor and his wife along with several other students from around the world. “My host (grand)mother wanted her home to be a stopping point for everybody from different places to gather together,” she says.

Cox says his host family offered a portal through which he could witness authentic Jordanian life. “It was good to see diversity, to see a radically different culture,” he says. “Things that at first shocked me became everyday things.”

Fogarty still talks to his Ecuadorian family weekly and fondly recalls a conversation with his host father towards the end of his stay. “My host dad told me I was one of the family, that they expected the same out of me as their sons. That felt so cool. I felt like I was part of their family, and I still feel that way.”

The family experience greatly improved his Spanish, Fogarty adds. “They would teach me when they saw I didn’t understand a word. They were so patient, and by the third week they didn’t really need to explain things anymore.”

Beyond the Comfort Zone 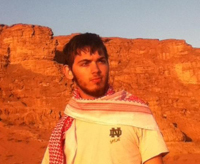 The SLA program tests language skills, cultural expectations, and a person’s ability to adapt. It is precisely this challenge that makes the experience worthwhile, say participants.

Kam says her experience in Japan introduced her to new opportunities and ideas. “It was a chance for me to meet people who were in different fields, fields that I had never thought of, people with different goals.”

“You have to be open to so many different things—open your mind to everything,” Fogarty says. “The people you meet, the things you do, the things you learn about yourself and what you want, your values… You come back a different person from all the things you’ve done. Putting yourself out there is difficult, but it’s so rewarding.”

“My time abroad was more than good,” Cox says of his summer in Jordan.