“You are looking for something. I know it.” So begins the introduction to the first issue of Lost Piece, a new monthly journal of letters created by a group of undergraduates to provide an independent forum for creative, thought-provoking expression outside of the classroom. 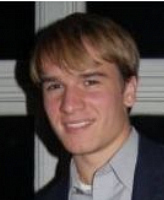 Editor-in-chief Stephen Lechner, who wrote the introduction, championed the idea that eventually became the journal. “Several undergraduates at Notre Dame wanted to have an outlet for intellectual and creative writing that wasn’t tied to classes or compromised by a GPA,” says the philosophy major. “These undergraduates saw it as something that had to come from students if it was going to work right, so they decided to put it together themselves.”

“It was an exciting process, though a lot of work,” Lechner says. “Hopefully as we gain experience we will be able to improve, but I’m pretty happy with the way it’s turned out thus far. I’m also pleased with the reactions to the writing itself—it was good to find that the feedback I received correlated to my expectations.” 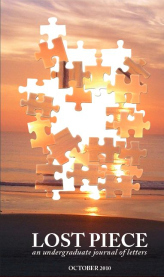 The Center for Undergraduate Scholarly Engagement (CUSE) funded the first printing of Lost Piece. The project also receives support from the Undergraduate Research Opportunity Program in the College of Arts and Letters’ Institute for Scholarship in the Liberal Arts.

“The Lost Piece fits very well with Notre Dame’s goal of undergraduate excellence, as it demonstrates students’ initiative and leadership in creating opportunities for themselves for intellectual activity,” says Cecilia Lucero, assistant director of undergraduate research at CUSE.

“Steve and his group of colleagues truly enjoy grappling with serious ideas, and they invite others to do the same,” she says. “Although the writers are pretty sophisticated thinkers, I like the approach that many of them take. It’s very much like a conversation, or invitation to participate in the conversation, not just ‘this is what I know.’”

A new, student-run, academic networking website also shares Lost Piece’s mission to promote intellectual engagement among students. Bearing the tagline “your academic life online,” the Hub, which launched in October, leverages new media such as blogs to encourage student interaction and dialogue, according to advisor Lucero.

“It has social networking features, but it’s not Facebook or Twitter. The Hub is not about updating people’s status every 15 minutes or talking about the football game or party they went to,” she says. 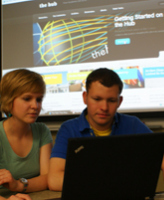 On the Hub, students can engage in debates or share perspectives on issues, connect with other students on joint research projects, share advice about experiences such as study abroad or applications to graduate school, and showcase their artistic or scientific work. The site will also include links to undergraduate journals, including Lost Piece.

Meanwhile, more issues of Lost Piece are in the works, with the next submission deadline on December 4, 2010. Lechner and Korson expect an increase in submissions as word spreads.

“The journal is a vision of what extracurricular activity should be all about: doing something,” Korson says. “We’re all students. We’re all learning. That’s all the more reason for us to work together for the good of our education. It is my hope that students from every major and discipline will recognize the benefits of extracurricular intellectual behavior and contribute in some way to Lost Piece.”