A pair of documentaries by 2011 graduates of Notre Dame’s Department of Film, Television, and Theatre are “cleaning up” on the film festival circuit. 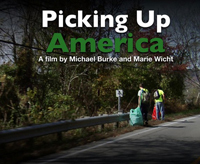 Picking Up America, by Michael Burke and Marie Wicht, chronicles four young idealists who trek across the country collecting trash, while examining the challenges and rewards in promoting “a zero waste America.”

Erin Zacek and Dan Moore’s film, The Elect, details the daily lives of the members of the controversial Westboro Baptist Church in Topeka, Kan.

The documentary was named a finalist at the 2011 Angelus Student Film Festival—one of just six films selected out of 527 entries representing 180 film schools and 30 countries. The Elect also screened as part of a collection of shorts at the prestigious 2011 Los Angeles Film Festival in June, where it drew multiple positive reviews. Film Independent called it “the most interesting and entertaining film of the night.”

Both The Elect and Picking Up America began as assignments in the Documentary Video Production course taught by Associate Professional Specialist Ted Mandell.

“The beauty of our film production program in FTT,” Mandell says, “is that we’re small enough in numbers so students can get access to equipment, as well as one-on-one access to faculty instruction. Our FTT curriculum—taking courses in film and television studies—builds a strong foundation for student filmmakers.

“And I think the Arts and Letters curriculum as a whole gives our students the liberal arts education that opens their minds to the types of subjects that make for great documentaries and student films.”

But Mandell says the successes of Picking Up America and The Elect truly stem from the talent and passion of the student filmmakers.

“It’s that connection with the viewer that makes a film memorable,” he says. “As a filmmaker, if you can make the viewer care on an emotional level about your subject, then you’ve got something.”