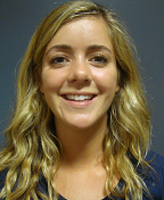 “I studied French for six years,” says the political science major. “When I got to France, I figured out how little I really knew. When you learn from a textbook, [you realize] there are a lot of things that are just different once you get there.”

After spending the spring 2010 semester in Angers, France, Porto knew she wanted to improve her French and so applied for a Summer Language Abroad (SLA) grant from Center for the Study of Languages and Cultures.

The SLA immersion includes coursework, opportunities for service learning and cultural engagement, and proficiency testing before and after the program.

The experience of studying the language in its home country was invaluable, says Porto, who attended Université Catholique de l’Ouest and lived with a Parisian host family during summer 2010.

“I learned a lot from just having constant conversation,” she says. “Being part of a family, even just observing them, helps you to learn the little idioms and expressions French people actually use and not just the ones they teach you in textbooks.”

This new understanding of the language and culture of the French people also helped Porto conduct research for her senior thesis on the burqa ban in France. “I talked to people to assess public opinion and see how they felt about the burqa—why they liked it or didn’t like it, why they thought it was a problem,” she says. “Those interviews were in French, so I got to work on both of my interests at once.”

Porto also honed her linguistic and people skills by volunteering for an organization called Libraries Without Borders.

“I helped them pack up books and send them to Africa,” she says. “A woman who I worked with didn’t speak English well, so I helped her translate things from French to English. At book fairs, I would also talk to people in both languages about their organizations.”

By the time she returned to campus, Porto says her language proficiency had increased dramatically. “I just feel so much more comfortable in the language now.”

Although she just graduated and may not take more French courses anytime soon, Porto plans to keep polishing her language skills by watching the news and movies in French and continuing to work and travel abroad.

“I’m trying to find some service work in Haiti where they speak French,” she says, “so I can use it to help people if I can.”