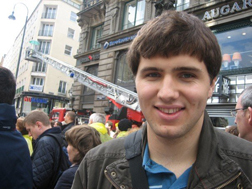 Each summer, some of the best students in the nation are selected to travel to countries around the world to learn what the U.S. Department of State calls “critical-need languages.” Among their ranks this year will be Notre Dame’s Kevin Godshall, who will study Punjabi in Chandigarh, India, through the department’s Critical Language Scholarship Program (CLS).

“[This program] gives students the opportunity to learn languages that ordinarily wouldn’t be available to them at college or in any other way,” Godshall says. He adds that he has done everything he can to learn Punjabi on his own and is excited now to get further instruction from native speakers and to live in a place where the language is spoken on a daily basis.

The CLS program teaches foreign languages that the U.S. government considers critical to national priorities, including Punjabi, Arabic, Korean, Indonesian, Hindi, and Azerbaijani. Although government service is not required upon completion of the program, the organization expects students to use the knowledge they gain in their future careers.

By the end of the intensive immersion, students have completed the equivalent of one year of traditional language instruction—with the added benefit of enhanced cultural understanding and appreciation.

This year, the program had nearly 5,300 applicants—including undergraduate, master’s, and doctoral students—but only 575 were awarded scholarships. “Individuals selected for this program must demonstrate significant potential,” Lance Askildson, director of Notre Dame’s Center for the Study of Languages and Cultures, says, “and Kevin Godshall’s award is recognition of such demonstrated potential.”

A German and mechanical engineering major, Godshall is now in the fourth year of the John J. Reilly Center for Science, Technology, and Values’ five-year Arts and Letters/Engineering program. He has also been a member of the India Association of Notre Dame for three years.

After graduation, Godshall plans to pursue a career that uses his mathematical and scientific skills but also allows him to explore his passion for Indian culture.

“I will most likely go into the engineering field, but I would like to have the opportunity to travel and use my language skills,” he says. “Hopefully, I can find some sort of work that will combine those two.”