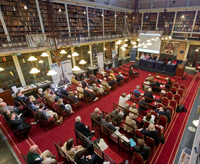 Nearly 100 years after the 1916 uprising in Ireland that challenged British rule and established the Irish Republic, scholars continue to explore the historical, cultural and literary contexts of the pivotal event in Irish history. Notre Dame brought together some of the world’s top intellectuals on the subject on August 30 for a conference at the Royal Irish Academy in Dublin.

“Ambiguity and complexity continue to cloud the meaning of the Rising, nearly a century after it captured the world’s attention,” says Robert Schmuhl, Annenberg-Joyce Professor of American Studies and Journalism at Notre Dame, who then probed the context for historical understanding of the event, particularly the role of one key figure, politician Eamon de Valera.