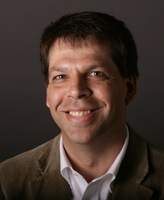 Robert Goulding, an associate professor in the University of Notre Dame’s Program of Liberal Studies, was recently awarded a grant from the American Council of Learned Societies (ACLS) to support a research project that combines mathematics, philosophy, and Renaissance science.

Goulding, who also teaches in the History and Philosophy of Science graduate program, says his work focuses on English scientist and mathematician Thomas Harriot (1560–1621), whom he calls “a really unusual figure” in intellectual history.

“In an age when mathematicians were few, and even many of the well educated were completely innumerate, Harriot seemed to live and breathe numbers,” Goulding says. “It was quite natural for him, for instance, sitting in his study in London during a rainstorm, to calculate how long it would take the courtyard outside his window to fill with water if rain continued to fall at the present rate.”

By analyzing Harriot’s optical manuscripts, Goulding looks to illuminate the day-to-day practices of the Renaissance scientist and explain his investigations into reflection and refraction within the larger context of Renaissance optics and natural philosophy.

As an extension of this project, Goulding and two scholars from the Max Planck Institute for the History of Science in Berlin will attempt a feat that several others over the past 400 years have tried but never accomplished: publishing annotated versions of Harriot’s entire collection of manuscripts.

“We hope that new digital technologies will allow us to overcome the obstacles that defeated our predecessors,” Goulding says.

Harriot wrote thousands of pages of notes on almost every topic that interested him, but he wrote mainly for himself, so his records need to be examined and interpreted.

“My work on the manuscripts to this point has involved not only deciphering the rapidly noted Latin, endless calculations, and scribbled diagrams,” Goulding says, “but also, with the aid of my own diagrams and mathematical software, a great deal of ‘reverse engineering’ to reconstruct the problem or the experimental apparatus that would have led Harriot to these particular calculations or diagrams.”

Because of this time-consuming and intensive analysis, Goulding says he was delighted to receive the ACLS award, which will help push his project forward.

“My work on Harriot in the past has taken place in snatches between other research projects,” he says. “I knew I needed an extended period really to do this project justice, and that is what this award will allow me to do.”

Goulding has also received funding from the National Endowment for the Humanities that will allow him to spend fall 2012 as a fellow at the Newberry Library in Chicago.

“It was a very nice surprise to receive the Newberry award after I’d already heard about the ACLS,” Goulding says. “The Newberry is one of the world’s great libraries for the period in which I work. I will be able to pursue there most of my research on the intellectual contexts of Harriot’s work.”

As a final product of his fellowship, Goulding will turn his findings into a book on Harriot’s optics, a topic he plans to supplement in print with information about the “optical culture” of the period and Harriot’s place in it.

On a more personal level, however, Goulding says his feeling of accomplishment will come when all of these manuscripts he’s wrestled with for years—the numbers, diagrams, and calculations—finally come into focus, when the sketches he has made in his own notebooks or on his computer precisely match Harriot’s.

“There is a feeling, then, of 400 years dissolving, and for a moment, I am working not on some dusty, yellowing manuscripts but elbow to elbow with a fellow human being on a fascinating puzzle about the natural world,” he says.

“People probably think of the history of science as a rather dry field. But for me, at least, the great reward of this discipline is the ability to slip into the thoughts, as it were, of someone separated by vast distances of time and space. I hope for many more moments of that sort.”