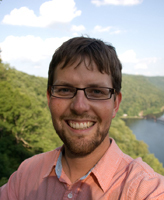 Daniel Escher, a doctoral candidate in Notre Dame’s Department of Sociology, takes his field research seriously: He plans to spend 18 to 24 months embedded in central Appalachian coal country to research the social effects of mining on surrounding communities.

“This topic and geographical region contain what I consider to be the pressing questions of our time,” he says. “How do we balance employment and environment? How do we balance short-term economic gains with long-term human and environmental prosperity? What are the limits of modernization? What boundaries should we put on profit-seeking endeavors? What role and authority does religion have—and should it have—in guiding our lives?”

To support his exploration of Appalachian culture and its complex relationship with the coal industry, the National Science Foundation awarded Escher a three-year Graduate Research Fellowship, a highly competitive program that funds research in an array of fields, ranging from sociology and political science to physics and engineering. 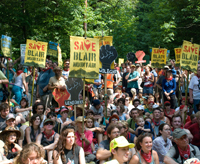 Escher’s dissertation focuses primarily on the social impact of mountaintop removal (MTR) mining, a practice that has become increasingly common, especially in Kentucky and West Virginia. This coal extraction method involves leveling mountains, filling the surrounding valleys with the cleared material, and replacing the native hardwood trees with grasses.

Escher, who recently spent a month in the region doing preliminary research, says MTR is both “one of the most pressing environmental dangers today” and “a necessity for maintaining some employment in a poor, rural region that has seen coal-related jobs plummet in the past 50 years.”

As a scholar, he is particularly intrigued by the role religious organizations play in the MTR debate. “Several national denominations have passed resolutions opposing MTR,” Escher says, “but the local implementation of that—in terms of what a pastor preaches from the pulpit or what happens in a Wednesday prayer meeting—has met mostly silence. Within each congregation, some members support MTR while others oppose it. Most churches try to keep the peace by keeping silent.”

He will also closely examine the social psychology of residents and activists on both sides of the issue and the various factors that influence their positions. 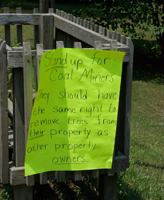 “I wonder what makes someone put a ‘Friends of Coal’ sticker on their car,” he says, “or hold a sign that says ‘Go home, tree huggers’ during a march against MTR. We know very little about pro-coal residents beyond some anecdotal stories. Conversely, I wonder what makes someone march against MTR or participate in a group that attempts to eliminate MTR.”

Escher says his initial experiences in the area have already demonstrated that residents who support coal are far more multi-dimensional than opponents to coal or MTR recognize, and he is eager to learn more about this seldom-studied demographic. 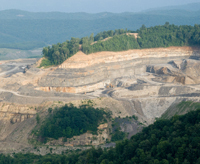 While living in Appalachia, Escher plans to work or volunteer part time in a setting—such as a mining supply company or surveyor’s office—that lets him observe some of the inner workings of the coal industry and interact with a wide variety of people. Truly immersing himself in the area is a good way to build relationships and trust with residents, says Escher, a native of Washington state.

“Many Appalachians are understandably wary—and weary—of talking with outsiders because of a history of being misrepresented by scholars, journalists, and politicians,” he notes.

While his research will include measurements such as employment, crime rates, nutritional indicators, social movement organizations, and ecosystem health, Escher’s extended time in residence will also allow him to provide an invaluable look at the people behind those statistics.

“The more relationships I build, the greater the chance that I’ll meet people who round out and fill in my understandings of coal and social life,” he says. “I will never become an ‘insider,’ but I hope to become less of an outsider—a part of the social milieu. When that happens, people tend to let down their guard a bit and share thoughts, feelings, and beliefs they would otherwise suppress.”

Escher says he wants to value and appreciate Appalachian residents as people, not merely research subjects or project participants. And his involvement in the area and with its residents is not something he plans to abandon after his thesis is complete.

“I intend to remain connected to Appalachia and to issues of energy, environment, and sustainability for many years to come,” he says.