Notre Dame sociologist Christian Smith’s latest book is one of two winners of the 2010 Cheryl Frank Memorial Prize from the International Association for Critical Realism (IACR).

What is a Person?: Rethinking Humanity, Social Life, and the Moral Good from the Person Up (University of Chicago Press) presents a new model for social theory that embraces the best of our humanistic visions of people, life, and society.

According to the IACR prize committee, “What is a Person? draws on first-wave critical realism to critique rival approaches and advance a model of the person that can serve as the indispensable basis for sociological theory and analysis.”

This year’s honor was awarded jointly to What is a Person? and Dialectic and Difference: Dialectical Critical Realism and the Grounds of Justice by Alan Norrie. According to the prize committee, “both books make, in different ways, a significant contribution to critical realist ethical theory.”

Smith, the William R. Kenan, Jr., Professor of Sociology, says he was thrilled to learn that his book had been selected.

“Critical realism is central to the ideas in my book so this recognition from the IACR provides real validation of my argument by the best thinkers in that theoretical tradition,” he says. “I am also happy to have my work engaged by scholars outside of American sociology—great critical realists in the U.K., Scandinavia, and Europe. It’s a real honor.” 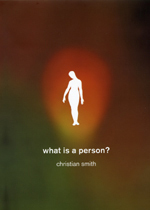 What is a Person? also recently won an honorable mention in the philosophy category at the 2010 American Publishers Awards for Academic and Scholarly Excellence (PROSE).

Smith specializes in the sociology of religion and is director of both the Center for the Study of Religion and Society at Notre Dame and the Center for Social Research. He also leads the University’s Science of Generosity initiative. Established in 2009 with a $5 million grant from the John Templeton Foundation, Science of Generosity brings together the often disconnected and diverse approaches to this topic in order to research generosity in all its forms.