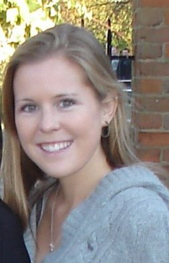 But that’s exactly what happened when Dorner, who graduated from Notre Dame in 2009 with bachelor’s degrees in English and the Arts and Letters Preprofessional Program, began working with John Duffy, associate professor of English and director of the University Writing Program, to study the language used to discuss autism.

“This experience definitely piqued my interest in working with autistic people, and more broadly, people with disabilities,” Dorner says. Now in her first year of medical school at Georgetown University, she and Duffy, an expert on literacy and rhetoric, have co-authored an article that is being published in the Journal of Literary & Cultural Disability Studies.

Dorner, who encourages other students to pursue a senior thesis, says her own experience demonstrates the value of investing in research as an undergraduate.

Working With a Mentor

Dorner’s academic interest in autism began during her junior year when she approached Duffy about being her mentor. At the time, she was already taking a class dealing with autism and regularly visiting an eight-year-old autistic boy.

But it was only after she enrolled in Duffy’s Literature of Disabilities class and began reading about the interplay of culture and science, Dorner says, that the idea for a senior thesis finally took shape.

“I saw there was a lot of debate back and forth in disability studies journals on the language used to describe autism, but there wasn’t much debate in medical journals,” she says. “That’s what I decided to take on.”

Dorner credits Duffy with helping her develop as a researcher and a writer—in part, she says, because he treated her as a colleague.

“He gave me a lot of freedom as far as doing my own research on my own subject,” she says. “He was a great reference. Whenever I was unsure where I should focus, he really helped me to narrow in on what interested me. It was very helpful to be able to talk it out.”

Dorner’s research focused on the theory of mind hypothesis, which posits that autistic people can’t interpret other people’s social cues and therefore can’t tell what others are thinking.

She found this language dehumanizing—in one book she encountered, an author used a chart that traced a cognitive continuum placing autistic people somewhere between other people and apes. As an undergraduate who was considering medical school, she found this troubling.

“The thing that struck me, going into a medical profession as I am, was how the people who wrote these studies produced work that was supposedly sound science but that didn’t consider that the people they were studying were real people with their own points of view,” Dorner says. “It made me more cognizant of the need to not use medical terms to define people.”

Instead, Dorner argued in her thesis for a more inclusive language that would include the various experiences of autistic people and would avoid categorizing them as “the other.”

Dorner recommends that undergraduates pursue a senior thesis, adding that it helped her develop research, organizational, and time-management skills. She learned how to better synthesize and communicate information, and how to motivate and manage herself.

“There’s a lot of freedom, so you have to take a lot of responsibility to stay disciplined,” she says. “If you can do that, you get to focus on one specific subject, and you come away with so much knowledge about it. The independence is great, and it really prepares you for your professional career.”

“The senior thesis calls for an extended consideration of an idea or problem, and gives students time to explore that idea or problem in depth,” he says. “Writing the senior thesis also demands that students develop their research and writing skills, which means it is an especially good idea for students interested in graduate or law school.”