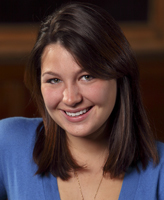 Notre Dame senior Paige Gesicki recently traveled to Gallaudet University in Washington, D.C., to research the culture and history of romantic relationships in the deaf community. Gallaudet is a liberal arts college for the deaf and hard of hearing, and it was a fitting place for her to begin an exploration into this topic.

An American studies major and gender studies minor, Gesicki became interested in the nuances of nonverbal communication after witnessing a deaf aunt and cousin rely on lip reading, miming, and gestures to converse with hearing family members not fluent in American Sign Language. She decided to research how these communication obstacles have influenced people who are deaf, starting with the development of romantic relationships.

The experience—funded by a grant from the Institute for Scholarship in the Liberal Arts’ Undergraduate Research Opportunity Program—was an enlightening role reversal for Gesicki.

“The primary language at Gallaudet is American Sign Language, and that made me a minority language-wise for the first time,” she says. “I learned how important facial expressions are and am now more aware of even hearing people’s body language and its significance in conversation.”

In addition to engaging with current students and faculty at Gallaudet, Gesicki spent time in the university’s archives, where she found oral histories, memoirs, and diaries that shed a historical light on her research topic. After returning to her hometown of Chester, N.J., Gesicki continued her research at library archives in the New York City area.

“I was able to find numerous memoirs that mentioned the difficulties of being a deaf person and dating. Many of them recounted being mistakenly perceived as rude, because conversation points would go unheard and then ignored,” she says, noting that these misunderstandings occurred mainly when a deaf individual dated a hearing person and was less than forthcoming about their deafness.

Many of the collections she examined also brought up another notable relationship influencer: technology.

“Technological advances have had a monumental effect on the deaf community. Dates can now be set up through a vast array of social networks such as email, instant messaging, Facebook, and Twitter—with more likely to develop in the future,” she says. “In addition, many dating sites have emerged exclusive to the deaf community, and the phenomenon of video chat has now allowed communication through sign language, as opposed to the TTY [teletypewriter] system previously used.”

In many ways, the dating norms of the hearing impaired are not much different from hearing couple. “The social scripts of meeting, going on a movie or dinner date, and other activities like the goodnight kiss are also adhered to by the deaf community.”

But Gesicki did identify some distinctive challenges deaf individuals face when dating. “In my research about dating in the deaf community, the most common issue I found was the need to alter modes of communication,” she says. “Difficulties arise if each partner does not find a personal and unique way to do so. No form of communicating, no matter how unconventional it may seem to the larger hearing majority, is out of question when trying to make a deaf romantic relationship work.”

After graduation, Gesicki wants to get an interpreter’s license for American Sign Language and go into marketing, with a particular focus on the deaf community.

“The only way to develop sensitivities to other cultures is through an increase of knowledge,” she says, “something I will contribute to by addressing an often-overlooked demographic.”