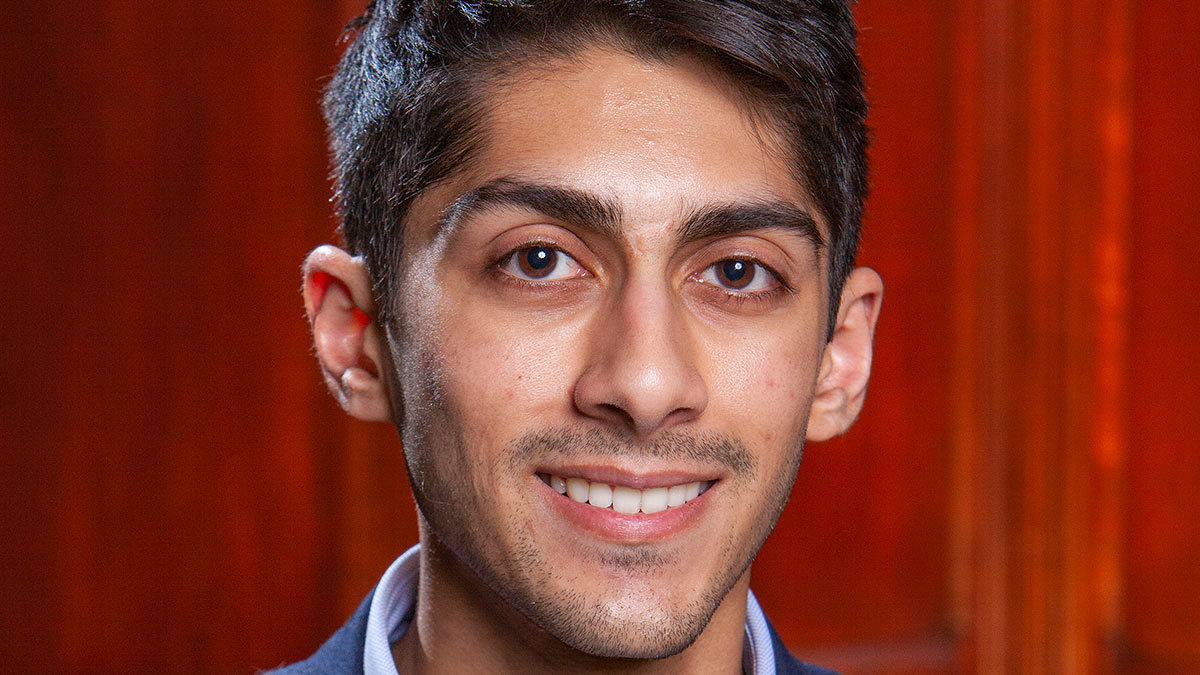 Juneja is among 62 students — mostly juniors but also seniors in five-year degree programs — selected for the honor from a pool of 840 candidates from 346 colleges and universities nationwide.

He is the eighth Notre Dame student — all from the College of Arts and Letters — to win the award since 2010. Among the previous winners, Christa Grace Watkins, class of 2017, and Alex Coccia, class of 2014, went on to win Rhodes Scholarships.

Established as a living memorial to President Harry S. Truman, the Truman Scholarship supports college juniors who answer the call to public service leadership with $30,000 for graduate study as well as priority admission and supplemental financial aid at select schools.

In addition to tuition assistance, scholars receive leadership training, career and graduate counseling and internship opportunities with the federal government, with the goal of promoting talented young people to positions of leadership in the public sector.

Juneja is a political science and computer science major in the Reilly Five-Year Dual Degree Program in Arts and Letters/Engineering. He is a Newman Civic Fellow, a College of Arts and Letters Dean’s Fellow and Hipp-Beeler Scholar. He participates in the Glynn Family Honors Program.

In addition to his studies, Juneja is involved with NDVotes and the Building Bridges Mentoring Program. He is a former chief of staff and director of national engagement and outreach for Notre Dame Student Government.

Juneja is active in local and national politics. He is an intern with Pete for America, South Bend Mayor Pete Buttigieg’s presidential exploratory committee, and is active in the St. Joseph County Democratic Party. He served as a researcher and software developer in the South Bend Mayor’s Office and Office of Innovation, where he developed an autonomous 311 chatbot to help answer questions about city government.

Between semesters, Juneja served as a software development intern with Optum, a health services business of UnitedHealth Group, and as a civic technology fellow with MicrosoftNY and BetaNYC, a civic organization dedicated to improving lives in New York via civic design, technology and data.

For his senior thesis, he is exploring the Interstate Voter Registration Crosscheck Program and its impact on voter turnout.

With a background in civic technology, Juneja hopes to use the Truman Scholarship to pursue a master’s degree in public policy with a focus on progressive government and technology. Specifically, he is interested in how policy and government innovation can build equity in America.

In applying for the Truman Scholarship, Juneja worked closely with Jeffrey Thibert, the Paul and Maureen Stefanick Director of the Flatley Center for Undergraduate Scholarly Engagement (CUSE) at Notre Dame, and CUSE National Fellowships Program Coordinator Elise Rudt. CUSE promotes the intellectual development of Notre Dame undergraduates through research, creative endeavors and the pursuit of fellowships.

“I am immensely grateful to Elise Rudt and Dr. Jeff Thibert in CUSE, who spent countless hours looking over drafts and guiding me through this process,” Juneja said. “I’d also like to thank my recommenders, Paul Ocobock, Rosie McDowell and Santiago Garces, who sacrificed their time not just to write my letters, but also to serve as incredible mentors to me. It is not lost on me that awards like this are often subjective, and that much of this may have just been luck. I know for certain, though, that it would not have been possible without the support of my friends, family and mentors.”

Juneja also thanked the late Joseph Buttigieg, former professor emeritus of English at Notre Dame, “who encouraged and inspired me from my first day at Notre Dame.”

“Prathm represents the best of his generation,” said David Campbell, his thesis adviser. Campbell is the Packey J. Dee Professor of American Democracy and chair of the Department of Political Science at Notre Dame. “Like many others, he cares about ensuring equity in our political system,” Campbell said. “But unlike most, he is actually doing something about it.”

For more information on this and other scholarship opportunities, visit cuse.nd.edu.