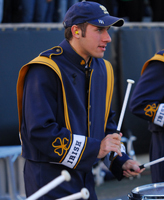 It has been “a blessing and a journey”—and one that happened almost by chance, Notre Dame senior Ryan Belock says.

As a freshman, the Strongsville, Ohio, native knew he wanted to major in music. With a father and brother who attended Notre Dame, Belock grew up attending football games and dreamed of playing with the Band of the Fighting Irish drumline.

Inspired by an unexpected conversation one summer with Jay Skelton, the artistic director of the Notre Dame Shakespeare Festival, Belock discovered “the gem” of the Department of Film, Television, and Theatre (FTT). Then, at the suggestion of his brother Brett ’08, he enrolled in some graphic design classes in the College of Arts and Letters and found yet another passion.

By his sophomore year, Belock had come to a realization: If he “overloaded” on credits and was strategic about scheduling, he could pursue majors in music and FTT and design.

When he graduates with his class this spring, Belock will have completed two of those degrees. He’ll finish the final three classes for his design major as a part-time student during the 2011-2012 academic year.

Belock, who has averaged 21 credits per semester, also participates in the marching band, glee club, and New Orleans brass band, and has performed in and helped produce more than a dozen theatre productions, from Macbeth and Two Gentlemen of Verona to Proof and Grease.

Professor Peter Holland, McMeel Family Chair in Shakespeare Studies and the College’s associate dean for the arts, says he is amazed by Belock’s enthusiasm and his determination to schedule it all. In the nine years Holland has been at Notre Dame, he’s known of no other student to combine these three majors.

“People think arts subjects aren’t demanding, but in terms of time they are hugely demanding,” Holland says. “To have somebody who can organize himself effectively enough to manage all three and to integrate them—to appreciate that the arts connect—I think that’s wonderful.”

Belock is humble about his accomplishments. Does he lose sleep? Is he crazy busy? Sure, he says, but all students at Notre Dame are busy. 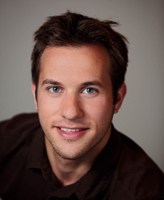 “Everyone asks me how I have the time. I tell them, ‘I don’t know. It just works out,’” Belock says. “I think it helps that I’m studying what I’m passionate about—the arts.”

It also helps that his parents have been supportive and always have encouraged him to do what he loves, Belock adds.

After graduation, he hopes to have “a creative job that thrives on teaching, performing, and life-long learning,” whether in a classroom, at a nonprofit organization, or on stage. In April, Belock auditioned for a role with Blue Man Group Productions in Chicago. He made it through three rounds of callbacks and was one of eight finalists. Though he wasn’t invited to training in New York City, he is qualified to try again next year.

Whatever happens, Belock says he will continue to be an ambassador for the arts at Notre Dame—a place he says is like no other.

“At Notre Dame, no matter what craft you are perfecting, be it music, theatre, art, or design, you are constantly reminded that it is a gift that must be shared with others,” Belock says. “As we create projects, productions, recitals, and portfolios, we are joyfully reminded that God created us in His likeness and out of love, with free will and freedom of expression.”