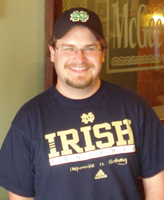 “It is designed to reach out to them and give them an opportunity to engage in actual research at the Gilder Lehrman Institute in New York City and to meet leading American historians,” he says. “It’s a really nice honor for a very select group of undergraduate students.”

At the institute, Johnson networked with professors and museum curators, researched rare documents, wrote a paper, and even created a short documentary. The experience, he says, was both educational and inspiring.

“I learned a lot more about using primary sources,” he says. “We dealt with letters that people have never used before, so we had to find out who these people were—it was all our own original research.”

The theme of the summer program, Johnson says, was 1861, the first year of the Civil War. “My specific topic was the role of the home front in providing aid and relief to soldiers.”

Johnson says he is applying some of the research methodology he learned in New York as he completes his senior thesis about Irish nationalism in the United States. “I’m researching 19th century Philadelphia and an Irish nationalist movement called the Fenian Brotherhood, which tried to fight for the independence of Ireland by staging actions both in Ireland and in Canada,” he says.

“I’m also looking at whether this group was representative of the Irish American community in terms of becoming American while simultaneously trying to maintain a strong sense of Irish nationalism.”

Johnson, who is considering a career as a professional historian, says his interest in history dates back to middle school. “My U.S. history teacher was so passionate about the Civil War, and it was impossible not to fall in love with the subject,” he says. “I guess I’ve always been fascinated with understanding where people came from and what makes people the way they are.”

As a student in the College of Arts and Letters’ Department of History, Johnson says he has continued to explore these kinds of questions while honing the practical skills he will need after graduation.

“The history professors that I’ve gotten to work with have taught me a lot of different tools that are going to be useful in terms of reading effectively, finding arguments, polishing my writing, and improving my research.”