The dynamic, sometimes contentious, relationship between religion and democracy has long fascinated Michael Hoffman, a class of 2010 political science major. And now, thanks to the National Science Foundation (NSF), he will be able to continue the research he started with his senior thesis as one of a select group of students to receive an award from the NSF Graduate Research Fellowship Program. Founded in 1952, the program funds projects with the potential to have lasting, beneficial effects on society and the environment. 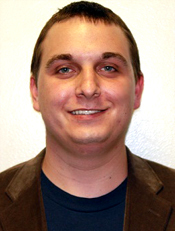 Hoffman’s thesis, “Religion, Conflict, and Regimes: A Two-Branch Model of Non-Democracy,” explores the relationship between the religiousness of a nation and its adherence to democratic practices. He completed it under the direction of Michael Coppedge, a professor in the Department of Political Science.

“The project relates to the question of whether or not more religious countries—and more religiously divided countries—are less likely to build and maintain democracy,” Hoffman says. “Ultimately, I find that only the conjunction of both of these phenomena seems to inhibit democracy; that is, neither religiosity nor religious fractionalization alone seems to lessen the likelihood of democracy, but countries that are both religious and religiously divided appear to find democracy more difficult to establish and sustain.”

NSF’s highly selective program, which accepts slightly more than eight percent of applicants, requires students to prove that their projects have both intellectual merit and the potential for broad societal impact. The criteria include: transformative concepts, the advancement of discovery in the particular field, and the encouragement of diversity and broadened opportunities for all citizens and underrepresented groups.

“These are big and important questions, and I am gratified that the NSF recognized his research as genuinely significant,” she says, adding that his findings may well guide policymakers and constitutional designers on “what sort of institutional arrangements will prevent conflict, enable a democratic regime to overcome social divisions, and eventually promote peace and improve welfare around the world.”

In September, Hoffman will travel to New Jersey to begin a Ph.D. program in the Department of Politics at Princeton University.

“I’m happy that the NSF saw my work as containing enough scientific merit to be worthy of funding,” he says. “Professor Coppedge has always emphasized to me that political science is really a ‘science’—and that outlook has influenced my work in a big way.”

The NSF research award includes three years of support, consisting of a $30,000 annual stipend, a $10,500 cost-of-education allowance, and a $1,000 one-time international travel allowance. Supported areas of study include: political science, psychology, linguistics, history, anthropology, physics, chemistry, engineering, and life sciences, among others. Students pursuing graduate research in both the United States and abroad are eligible to apply.