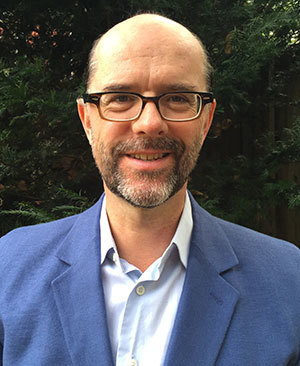 Joshua Lund has never been tempted to specialize in one form of media. In fact, he finds studying a combination of literature, visual culture, and art to be the richest way to think about social problems in Latin America.

Lund, who joins Notre Dame’s Department of Romance and Romance Languages as an associate professor of Spanish, has research interests that are both broad and intentionally interdisciplinary.

“Professor Lund is a leading scholar in the fields of Mexican and Latin American studies, and he has established a reputation as a top-notch literary and cultural critic,” said Thomas Anderson, chair of the department and a professor of Spanish.

He soon realized that to truly study such work, he needed to master Spanish.

After college, Lund traveled to Mexico, Spain, and Chile. Returning home essentially fluent in the language, he landed a job serving the Spanish-speaking population at St. Stephen’s Shelter, a program dedicated to ending homelessness in Minneapolis.

“That guided me back to studying literature and culture with a political and social edge to it,” Lund said.

As he prepared for graduate school, Lund considered many disciplines, but settled on Latin American culture because it was “one of the most exciting areas of interdisciplinary practice and debate.”

“I wasn’t just thinking ‘I might as well study literature because I don’t have anything to do,’” he said. “I had questions I was interested in pursuing.”

Currently, Lund is focused on a collaborative project, Men with Guns: Cultures of Paramilitarism in the Modern Americas, with co-director Anne Garland Mahler, an assistant professor of Spanish and Portuguese at the University of Arizona.

Alongside more than a dozen collaborators from wide-ranging disciplines—including sociology, political science, anthropology, law, literature, film, and history—Lund is examining “the history and overwhelming cultural strength of forms of paramilitarism in the modern Americas.” A symposium scheduled for November in Tucson, Arizona, will serve as the launch of a collaborative book project on the topic.

Lund, who previously was at the University of Pittsburgh, is also working on a study of transnational film that deals with “the idea of America, the fragmenting of capitalism in the late 20th century, and the way in which filmmakers have approached questions about American capitalism.”

As part of that research, Lund will write a short book on German filmmaker Werner Herzog, the first in a multi-volume series on transnational film. The director of Grizzly Man, Fitzcarraldo, and Aguirre, the Wrath of God, Herzog has produced multiple films in Latin America—a happy coincidence for Lund, who is a fan of his work.

As eager as he is to be analyzing the formidable filmmaker, Lund is still more enthusiastic about his role as a teacher. In the fall semester, he is offering a survey course on Mexican film.

“Notre Dame is a university that is really committed to teaching and to the students,” Lund said. “I love research and writing, but the most exciting part of my job is teaching.”

Soon, Lund will be teaching a wider variety of courses and working with graduate students on their dissertations.

“Notre Dame students are extremely bright, so to be in that constant dialogue is very attractive,” Lund said. Working with graduate students “is something that I take a lot of pride in and put a lot of work into. It’s an exciting moment when they’re doing the dissertation project. It’s a gratifying thing to participate in as faculty because, basically, you’re working with an equal.”

Lund is anxious to build on what is already a highly regarded program full of “energetic and extremely smart colleagues.”

“In the humanities, we confront people with seeing the world in a way that surprises them, and, hopefully, illuminates them,” he said. “It’s a good thing in life to be curious and open and generous with people.”