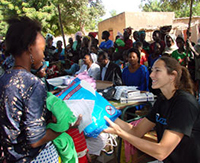 Ruth Riley, a 2001 graduate of Notre Dame’s College of Arts and Letters and star player of the ’01 Irish women’s basketball national championship team, returns to Notre Dame on April 15 (Tuesday) to deliver the talk “From Professional Athlete to Humanitarian: How I Became Involved in the Fight Against Poverty and Disease.”

The event, which is free and open to the public, will begin at 7 p.m. in the Eck Visitor Center Auditorium on the Notre Dame campus. It is one of a series of Discussions on Development hosted by the Ford Family Program in Human Development Studies and Solidarity.

Riley’s visit is just days before World Malaria Day, which falls on April 25. Riley is active in Nothing But Nets, the U.N. Foundation’s anti-malaria initiative. This grassroots campaign raises both awareness about the malaria crisis in Africa and funding to purchase protective nets. Each net costs only $10. Nothing But Nets works through U.N. Partners and other local and international organizations to distribute the nets. Since its inception in 2006, the campaign has distributed almost 24,000 nets.

Riley believes her work as an athlete has given her a unique role as a spokeswoman. “I get to merge a lot of my passions together,” she says. “I get to use the platform of a sport that I love to engage with different groups of people, and unite these groups together and bring a life-saving resource to many grateful families. It is a humbling, emotional, and life-changing experience.”

In addition to Nothing But Nets, Riley is a supporter of No Kid Hungry and a co-founder of Inspire Transformation, both of which address the healthy development of youth.

Following her graduation from Notre Dame, Riley was drafted to the Miami Sol. She continued her WNBA career with the Detroit Shock, San Antonio Silver Stars, Chicago Sky, and, currently, Atlanta Dream. She also played for the U.S. women’s basketball team in the Athens 2004 Summer Olympic Games, taking home the gold.